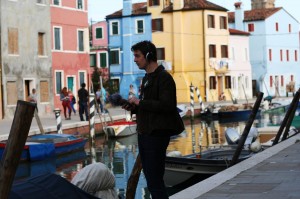 Following on from my previous post about field recording tips, which was a bit more on the technical side, I’ve been musing over what makes a good field recording from a more conceptual and subjective point of view, and have come to a few conclusions about what a good field recording should contain. I should mention at the outset, of course, that these are my opinions and to others, the essential qualities of a field recording may differ. I’ve tried to give an example of what I mean for each.

1. Sense of place – could this recording be from anywhere?

Firstly and most importantly, does the recording convey a sense of that one place, and only that place?

While it would be off the mark to claim that every location offers a unique and equally interesting soundscape, it’s also true that you can, without picking your sound or location judiciously, end up with yet another recording of a busy street or a flowing river. Or a street that sounds like a river, or a river that sounds like passing traffic. So a really great field recording captures something that’s unique about that place – whether iconic and obvious (like the tolling of a particular bell), or something that just happens to pop up in that place.

If you can listen back and say that this recording could pretty much only have come from that place, you’ve hit gold.

This from Leicester Market works well in that respect – the distinctive East Midlands accents, combined with their density and closeness, could only come from this most famous city landmark.

listen to ‘Leicester market’ on Audioboo

Or this recording of the traditional greeting song of fishing women at Lake Turkana, Kenya, is instantly and uniquely of that place.

Alongside sense of place, there’s a sense of time to be captured in any field recording too.

Is there a particular event going on in your recording that pins it down to that day, or that time? This is where recordings of special events, carnivals, ceremonies etc. come into their own as the clearest candidates, but it doesn’t always have to be so obvious. The same place can sound very different at 9pm than it did at 9am the same day as the natural rhythms of that place bring different sonic environments into being depending on when you happen to be there. Clearing out time at the bar? Morning deliveries and setup of a market? The last din of evening traffic gently being replaced by the hum of cicadas? All valuable events in the lifetime of a place, and all add a new dimension to your recording.

This recording from the British Museum’s clock room took place at midday, with all the clocks striking at the same time – it really could only be from that place at that time.

3. Development – does anything happen in your recording?

Added to freezing a particular place and a particular time for everyone to hear is the fact that, of course, field recordings occupy their own space in time and can build and develop within themselves. A recording of one drone, hum or sound pattern continuing throughout a recording is one thing, and indeed can offer a hypnotic and mesmerising experience if the sound is right. But at times it can be akin to comparing a black and white TV picture to a full-colour HDTV experience. The very best field recordings have movement of their own, develop and tell their own story within their running time. So what happens during your field recording, and can it tell its own story and unravel its own mini-drama over the course of just a few minutes?

This recording of the vaporetto (water taxi) in Venice tells a little story, taking in a journey, pulling into the station at Murano, the conductor’s announcements, passengers coming on and off and then moving on again in three minutes.

listen to ‘Murano, Venice – vaporetto coming to a stop’ on Audioboo

Similarly, this recording from Camden Market in London, walking through a multicultural, multilingual tourist attraction moves from sound to sound almost every ten seconds in its all-too-brief running time.

4. Length – is it a field recording or a sample?

How long does an environmental recording need to be before it can be classed as a field recording? Is any such recording a field recording, no matter the length? Or is, say, a ten-second snippet more like a quick sample, and a field recording by its nature a longer, more immersive experience? I started out using field recordings on the Cities and Memory map that were a maximum of two minutes long (initially due to technical restrictions that are now no longer an issue, thankfully), and depending on the sound, it’s really not long enough. For me, a field recording should be immersive and expressive, and if there’s lots going on in a recording, or a sense of movement (e.g. a location walkthrough), an event, or simply something so stunning it demands space, then a recording does need to be of a
certain length to achieve the desired effect. That effect may be to document the sound of a place thoroughly, which takes time – or it may simply be to present some outstanding, beautiful sound that allows you to get ‘lost’ in the sound of that location. It takes time to get lost, so keep the record button on!

Here’s a field recording from Palermo, Sicily that is just the right length to help you experience the rainstorm yourself.

listen to ‘Rainstorm in Palermo, Italy’ on Audioboo

Though I’m personally less concerned than some field recordists on having the absolute highest fidelity of recording, done with the best quality mics and so forth, you do need to have a field recording in which you can hear what you need to, and hear it well. I’m firmly from the school of ‘the best recorder in the world is the one you have with you at the time’, and my mobile phone has sufficed on many occasions. But there’s still something to be said for clarity on two levels. Firstly, and most obviously, you need a clean recording without clicks, pops, wind noise, rustling clothes or the sound of your own breathing all over it. It’s no use capturing all of the aspects above if the recording’s not crisp.

Secondly, it’s about making sure you’re in the right place when you’re recording. Because microphones hear differently to human ears, they will tend to telescope towards the loudest sound they pick up, which means your recording could be dominated by a sound you weren’t consciously listening for at the time. The solution? Always monitor with headphones on so you’re hearing the same things as your recorder, and if you need to move yourself physically towards the sound you’re trying to bring out, then get moving – using a field recording device is like using a prime lens on a camera. You need to frame your sound, just as a good photographer frames the shot and doesn’t leave it to cropping in post-production.
That’s it! I’d be really interested to hear your thoughts on these points, or what would make your top five, in the comments below…