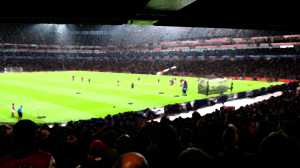 First of all, full disclosure: I am an Arsenal fan. So naturally, while taking in the recent Champions League clash against Anderlecht, I took along my trusty recorder to document the atmosphere and the crowd sounds. As it turned out, it was quite an eventful match, with Arsenal going 3-0 and then somehow conspiring to draw 3-3 with some risible defending. The field recording is a composite of some of the most interesting moments, including Alex Oxlade-Chamberlain’s goal to make it 3-0, and two of Anderlecht’s goals – hence you can clearly hear the atmosphere get a lot darker and the vociferous complaints start to come from the crowd.

The reimagined version, then, came quite naturally, as I tried to express some of the frustration of what it’s like to support Arsenal this season through drones, vocal cutups and a general sonic sense of dread. I’ve also mirrored the way the game played out – the piece starts out with the fans supporting the team, general chanting and so on. Halfway through, the Anderlecht goals are represented by manipulated versions of the crowd booing, which build and swell over vocal clips of fans variously making demands of the team. By the end, it’s quite oppressive, representing the dark and hostile atmosphere at the Emirates, as the game played out the worst nightmares of the most ardent Gooners.

listen to ‘Arsenal vs. Anderlecht, 4 November 2014’ on audioBoom

listen to ‘The living nightmare of the Arsenal fan’ on audioBoom