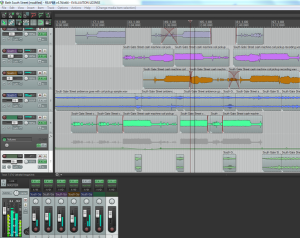 One of the most frequently-asked questions we get from musicians, artists and curious visitors approaching Cities and Memory for the first time is ‘how do I go about reimagining a sound?’ or ‘what does remixing a field recording actually mean?’. It’s a perfectly valid question, of course – one person’s interpretation of what this could mean can be very different from another person’s, which for me is part of the beauty of listening back to how people have approached field recording and reimagination.

For me, so long as the final piece contains and reflects the original recording (or elements of it), then absolutely anything goes. Over the months, we’ve had ambient music, techno, vocal cutups, abstract noise and beautiful music. People have played instruments, created entire fictional bands to accompany field recordings, run sounds through Photoshop, taken inspiration from the movies – almost as many approaches as their are sounds on the site.

This post is a quick whistle-stop tour through a few of the different approaches we’ve seen over the last year. This isn’t to say that these are the absolute best sounds we’ve received (though many of them are among my personal favourites!), but a selection to demonstrate how artists around the world approach reimagining sound and hopefully to inspire future contributions.

One obvious approach is to create some music using non-musical elements of a field recording, as in this first piece from Caffe San Carlo in Turin. It takes percussive elements such as plates and spoons and builds a track from them – everything here is taken from the original recording. The second example below is entirely constructed from the sounds of a car wash in Oxford, turned expertly into a new piece of music by Alan Bleay.

Next up, recordings of a mock medieval battle in Cardiff, which has been reimagined as an epic movie battle, by rendering music from an old medieval movie throughout the recording to give it the dynamic and atmosphere of something from the silver screen.

Next up, some more ‘traditional’ remixing taking its cue from club culture – here Karhide takes an anti-ISIS protest field recording, strips elements from it and builds them into a pounding techno track that wouldn’t sound out of place filling floors. And secondly, Martin Kristopher makes a piece of throbbing electro dub appear out of nowhere as an accompaniment to the sounds of the Planten and Blomen park in Hamburg.

Drones and ambience can be a staple of reimagining sounds, so here are two examples from the ambient/drone side of Cities and Memory. The first is made entirely from hyper stretched and effected loops of seagull calls from Cornwall, layered up into a dramatically new sound that is made from the original birdsong. The second takes the sound of an insect chorus in Thailand, and Pascal Savy builds a pulsing, deep drone epic over the original.

You can even abstract the field recording completely – in this example, Christian Hagelskjaer removes the original source sound and rebuilds it using his voice, imitating the sounds from the field recording, and adding description and colour inspired by Tripadvisor reviews of the location. Inspired!

Another approach is to take an analytical approach to the sound and look at how the sound will behave over time if you alter certain parameters within it or force it to do something – here, a recording of clocks in the town of Chiliwack, Canada, builds over minutes as loops of very slightly different lengths drift out of phase from one another, Steve Reich-style.

You can also take two or more field recordings and by their juxtaposition create something new – a fictional place that sounds like it should exist and sounds like another feasible field recording, but on closer inspection cannot possibly exist. In our first example, natrYX and die bie recorded simultaneous soundscapes in Athens and Berlin at the exact same time, and stitched them into one new sound that represents the same instant, but in different locations. In the second example, the same bells are recorded in two different locations in the same town and layered together, giving a new and impossible perspective on how they might be heard.

Some artists have taken inspiration from the history behind a location, as in Nick St. George’s reimagining of Walcot Chapel in Bath. Discovering that the novelist and playwright Fanny Burney was initially buried in the graveyard of the Walcot Chapel, Nick read the text from the monument at her final resting place, from the author’s journals and diaries, and added clips from musical contemporaries of Burney to create this fascinating new piece inspired by history.

A few reimagined sounds are plain scary! On hearing the sounds from the British Museum’s clock room, I was immediately struck by the version of Alice in Wonderland I’d seen by Jan Svankmajer, and tried to create something that would serve as a fitting soundtrack to this, with some quotes from the movie for good measure. Unsettling.

And if all else fails, you could simply do something plain and lovely with the field recording, allowing it to inspire a simple piece of musical loveliness, as in these last two piano-led contemplations by Peter Lloyd and Mark Taylor.

And if that little tour has inspired you to reimagine some sounds of your own, please drop us a line and get involved – we’d love to hear from you!