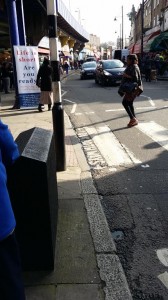 You see – or, more appropriately, hear – street preachers in many cities, but this one was particularly vehement, calling people out for spending money and taking pride in their appearance and so forth. Every so often you can hear the people she was with, who were giving out leaflets while she did the hard work, joining in with a one-word chorus. For the remixed version, yeah, it’s all gone a bit Steve Reich with the layered voices, but I’ve tried to keep it interesting by isolating four phrases I found rhythmically (rather than thematically) interesting, bringing the last two in later, and switching the panning around on all four throughout the remix, so it should make for a good headphones listen, this one.

listen to ‘Song of the Brixton Preacher’ on Audioboo