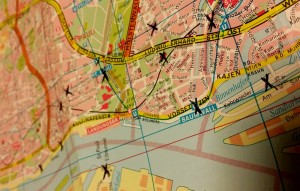 Before my recent field recording trip to Hamburg, I wrote part one of this post, making assumptions about the process of sound mapping a city (read it again here), and decided to write once I got back on things I’d learned from the process, which can be divided into practical considerations and more theoretical thoughts, starting with this assertion.

Let me define what I mean by this.

To my mind, if you’re trying to produce a geographically-representative sound map of a city, you will fail – the city is too vast and it’s impossible to explore all of it and map all of it. You will end up mapping tiny pockets of a city that you walk round and not getting anything like a representative picture of its size and scale unless you spend weeks or months there. And in fact massive parts of any city will effectively sound identical (increasingly true with the previously-discussed sonic homogeneity that comes from urban modernisation), so is a geographical sound map even a worthwhile exercise?

Therefore it seems sensible to try to create something that maps the sonic character of a city regardless of location within that city, and without covering all geographical areas – simply looking at all the things that give that place its unique sonic character. After all, this might look like a geographical skew if you see it on a map, but in theory it has more chance of really showing what a city sounds like. However, there are problems with this too.

Cities also sound different at different times of year and change over the years in terms of their sonic qualities. Therefore, just as a photographer chooses a shot and frames that moment in time, so the field recordist freezes sonic moments in time, and by choosing what to include and what to omit makes the same editorial and artistic decisions as a photographer or a filmmaker.

Therefore, if what you’re doing is recording the city’s sounds as they appeared interesting to you at a certain point in time, an objective, documentary sound map is all but impossible. It’s about memory, not about documentary – as coloured and distorted as an old photograph, potentially.

The city is your own experience of it – so a sound map is necessarily personal.

For instance, to some people Hamburg may, in sound, represent media or entertainment or construction or cars. To me, because of what I saw and heard at that given time, Hamburg is political protests, it is the rustling of autumn leaves, it is midweek quiet not weekend hubbub.

Your own experience of the city, let alone what it sounds like, defines what it is to you. And this is the very essence of what Cities and Memory is about, right from its very name – in Calvino’s Invisible Cities (from which the project takes its name), Marco Polo is describing his own personal experiences and interpretations of Venice in many different ways to Kubla Khan. We take the sounds of places as they seem interesting to us, and we imagine how they might sound or how they could potentially sound through the medium of the remixed versions.

Making your own luck

If you take the technical kit and knowledge out of the equation (of course you need to know how to capture the sound well once you’ve found it), a lot of field recording is about good fortune and serendipity. You’re in the lap of the gods – a good field recording can just land on you from nowhere, as when I came across an unexpected mass street protest in the Altona district. But knowing a little of the city and planning as much as you can based on educated guesses or local knowledge means you can maximise the opportunities to come across great content seemingly by chance. You can to some extent make your own luck. 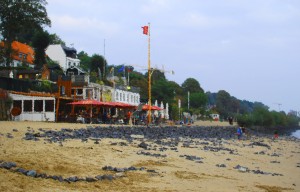 Loads of your recordings will be useless

If you’re like me, there will inevitably be occasions when you’re wandering round vast suburban areas with no sonic interest whatsoever, and nothing comes of it. Or there will be places that look amazing and are fantastic to experience, but the sound from them just doesn’t work, so you have to ditch the sounds. Or there will even be places that you thought sounded great at the time, but when you listen back later, there’s no spark or magic to the recordings at all, so you have to ditch the sounds.

…So record a lot!

Don’t lose heart! There will also be times when you listen back to something you weren’t expecting much from and discover gold, too. But it’s better to over-record, to be constantly primed to take that recording, to have lots of raw material so the editorial selection process is a pleasure, a treasure trove. If you’re ever wondering if you should get off that tube stop one early to record something that MIGHT just be interesting, or if you should take that little detour because you thought you heard something, you should do it right away.

1. I mentioned that it’s tiring on the ears, but I forgot that it’s tiring on the body too. I estimate that on a couple of days during the trip I walked 20km or more per day. And walking around is essential, to get the feel for the city but also to come across unexpected sounds in places you hadn’t thought of. Otherwise you’ll also end up with a lot of public transport and metro recordings!
2. You WILL run out of batteries (depending on your kit – I’m using a handheld Zoom H4N which runs on standard AAs). I took a dozen to be on the safe side and used all of them.
3. A paper map is super useful – not just in case your smartphone with its map runs out of juice, but I found marking the locations I’d recorded at very helpful in terms of getting my head round the geography and seeing how the map was panning out (it’s also very satisfying to mark a map with Xs!).
4. I can’t emphasise enough how much it’s important to tag each recording – at the end, just say where you are and describe what you’re hearing. Even if at the time you think you won’t forget what the sound was or where you were, when you’re ploughing through 100+ recordings, it will be impossible to tell what some of the sounds are, let alone where you were when you made them.
5. Back up, back up, back up! I spent every evening once I returned backing up files, and beginning the process of editing the sound files and labelling them, so each day’s work was catalogued at the end of the day. This made things infinitely easier upon my return – it’s much easier to label and edit recordings when they’re fresh.

The Hamburg remix project launches soon, when around 30 sound artists and musicians will be reinterpreting our Hamburg recordings in one day – there will be a preview post to introduce this nearer the time, but the project will live on a mini-site at www.citiesandmemory.com/hamburg. 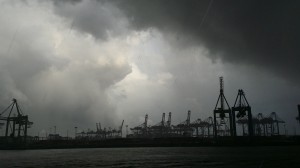