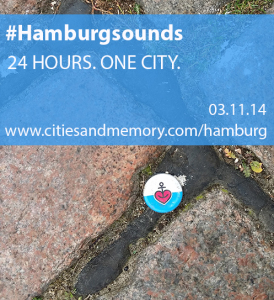 The time has come, and at 12 noon GMT today, we’ll start to release the collection of #Hamburgsounds – at least one per hour, representing a different hour in the life of the city.

The sounds loosely follow my own journey around the city, from my base in St. Pauli around the Reeperbahn, exploring the city over 24 hours. You’ll hear harbour sounds, street markets, church services, late-night parties, football matches and even follow a political protest and a major police operation across the city.

The artists involved hail from ten different countries around the world. We have local Hamburg residents, but we have people from as far afield as Cape Town and Los Angeles who have taken on their own slice of Hamburg’s sonic life and turned it into something of their own. Each of them was presented with a choice from around forty field recordings, and chose the sound (or sounds) that most inspired them to do something creative in response.

Over the next 24 hours, this blog will introduce the sounds one by one, with the remixers telling us in their own words why they chose their source sound, how it inspired them and where their interpretation of the sound comes from. You’ll also be able to explore the city’s sounds directly via the Hamburg sound map, or indeed the global Cities and Memory sound map on the homepage.