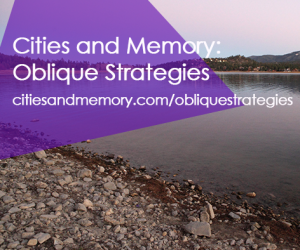 The project is housed at www.citiesandmemory.com/obliquestrategies,and features:

Throughout the rest of the month, we’ll be bringing you the highlights from the project, allowing each artist to describe in their own words how they applied the Oblique Strategies to the source recording and how they were inspired by the randomly-chosen cards.

The sounds from across the world are as diverse as the clatter of vintage printing presses, a shimmering chorus of insects, Hawaiian waves, the clamour of an English football match, the busying thrum of an international airport, the calm of a Buddhist temple and the power of a driving thunderstorm.

The remixed versions range from musical tracks built from the original samples, drone and ambient pieces built from field recordings, abstract interpretations of the original sounds and frantic cutups elaborately constructed from the source sounds.

An album of highlights from the project, entitled Cities and Memory: Oblique Strategies, will be released digitally later in April via http://citiesandmemory.bandcamp.com.