Two sound artists from Athens (natrYX) and Berlin (die bie) teamed up for one combined soundscape in our Oblique Strategies project, opting to blend one moment in time in two different places into an impossible reimagined soundscape. Dealt the cards How would someone else do it? and Display your talent, the duo explain their approach here. 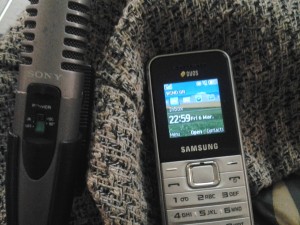 “The idea was for the two participants who live in different cities in Europe (Athens-Berlin) to find a location for the recording and to start it at the exact given time, simultaneously (2300 for Athens and 2200 for Berlin, date 6-3-2015). Then the two source materials were used to create the remix.”

“The two tracks run together in unison (ταυτοφωνία) to create this effect where the two soundscapes of the different locations and sound events are melting to each other and create even surprising orchestrations and coincidences. I call the piece Athens/BerlinTaΦtophony I.”

“Both cards worked fine for us. The first card “ How would someone else do it?” is being answered as if I am in Athens and its not possible to be simultaneously in Berlin to record the source material for the remix, someone else is being chosen to do it. How my colleague will record and what location would choose is up to her.”

“For the second card “ Display your talent” both participants are displaying their talent in such a way where it is possible for their ability to rise as they choose instinctively the sound source, location for the remix, and finally the way the two sound scapes are remixed.”