We’re pleased to announce an open call for sound artists and field recordists to take part in our contribution to World Listening Day 2015 – a new project called Sound Waves. 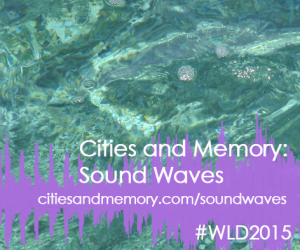 We want your field recordings and your reimagined version of the sounds of water, wherever it can be found in the world.

The project will celebrate and build on this year’s World Listening Day theme of water by presenting a collective reimagining of the sounds of water around the world and the role it plays in our lives.

Here’s how it works:

1. Artists submit a field recording and reimagining of water somewhere in the world: ocean, river, lake, stream, swimming pool, boiling kettle, splash of a puddle – anything in which water is the defining sound.

2. The reimagined sounds will be edited by Cities and Memory into one longer, mixed sound piece titled ‘Sound Waves’, incorporating many of the sounds in a new context.

3. This final piece, titled Sound Waves, will present a collective curated reimagining of the sounds of water from artists around the world in one piece, a shared reflection on water and the role it has in our lives.

The deadline for signing up is 19 June, with contributions in by 2 July.