When we first started Cities and Memory, and in the many months since then, the following collection of sound maps has been a great source of inspiration and pleasure to us.

So here’s a rundown of ten of our favourite sound maps, with a few details about what we think makes them different, special and worth your valuable listening time!

What Ian Rawes has achieved with the London Sound Survey and its myriad ways of presenting the sounds of London is remarkable. It’s not just the extremely comprehensive general sound maps, which capture the diversity of a metropolis like London, as well as aspects like its waterways and historical London sounds.

The range of projects undertaken on the site are fascinating, from the epic 12 Tones of London travails to the presentation of sounds from the British Library.

Ian also takes the sounds beyond straightforward sound mapping into new areas like a new version of the Underground map for London’s waterways, or a beautiful interactive diagram of the sounds from Tower Bridge. Truly inspiring stuff, which you can lose hours looking around. 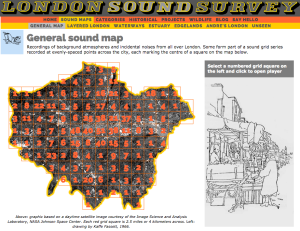 The big end-of-level boss of sound maps, a map crossed with a 24-hour radio station playing field recordings from around the world.

I love that it’s open and participatory, and you can take elements of it and use them elsewhere, creating your own mini sound maps to use in other projects.

The scale of it is also unbelievable – with over 30,000 recordings and over 1,150 contributors, it’s truly a global public service that Udo has created and offered to the world. 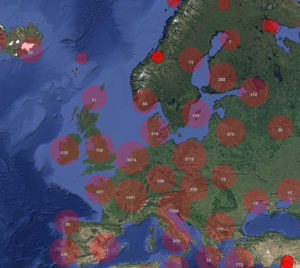 The British Library undertakes various sound projects over the years, often with their own individual sound maps.

Some use the Library’s own vast resource of sounds, but the most interesting invite the general public to contribute sounds from wherever they are.

Famously, from 2010 to 2011 they collected more than 2,000 recordings from ordinary people across the UK to create a participatory sound map of the entire country.

There are sound maps of global accents, traditional music, wildlife sounds and many others. And if you’re reading this before 21 September 2015, you can take part in their latest project to map the sounds of Britain’s shores. 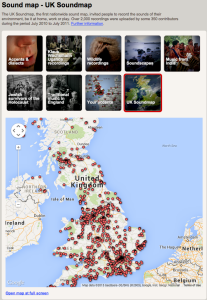 While it may lack the volume of sounds contained in the maps above, the user interface is intuitive and beautiful, a joy to navigate – and the quality of sounds of there is really high, capturing the spirit of the city wonderfully.

Sounds are colour-coded by category, and for each you can record your own notes, whether they’re memories the sound evokes for you or the stories you experience when you listen to each sound.

A great example of a super-detailed single location sound map, intended as a constantly-shifting sonic time capsule of the city.

You can search for sounds by location, when they were uploaded, season, day of the week and more, with each sound offering up details as to who recorded it, how, what was going on and even what kit they used to capture the sound.

Even better, the project is open to contributors, and sounds are available to download under a Creative Commons Share Alike licence.

Sound Transit is a unique user experience among sound maps, setting you off on a journey of sound.

You choose a starting point and a destination from their impressive bank of more than 2,000 field recordings, along with the number of stopovers, and the site assembles a unique sonic voyage for you.

Once you’ve found a sonic voyage that makes you happy, you can even download the sound files and take it with you on the go, see a map view of your journey, or email the selection to a friend. 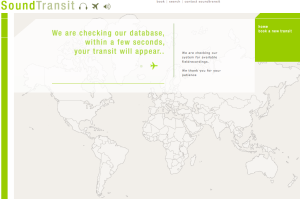 The Glasgow 3D Sound Map looks at environmental sound from a noise pollution standpoint – on its Think About Sound map, sounds are logged with the emotional state of the recordist before they heard the recorded sound (often ‘calm’), and again afterwards (often ‘agitated’!).

Other parts of the map offer a 360 degree panoramic photograph with the accompanying soundscape playing. Here, as well as facts like the decibel level recorded at the location, is an aggregate ‘annoyance score’ of how irritating (or relaxing/pleasant) users find the sound – you can rate the sound out of ten and join the experiment from the comfort of your own home.

There are also iOS and Android apps to accompany the project, and secondary maps measure things like the number of noise complaints per region of Glasgow. 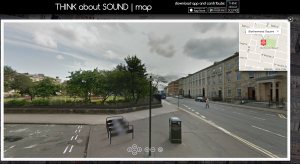 Hundreds of sounds from across Mexico, with a particular focus on Mexico City – easy to navigate and impressive in its range, sounds are divided into categories like music, natural sounds and so on.

The Nature Sound Map does exactly what it says it will – provides a global database of the sounds of nature, a collaboration by a group of nearly 100 professional nature recordists.

Impressively, it covers 81 countries, and all manner of rare species and fascinating natural soundscapes and environments, from monsoons in Borneo to seal colonies off the coast of Namibia.

Another of those sound maps you can lose hours in, the sounds – as you’d expect from a collaboration between professional nature recordists – are all extremely high quality too. 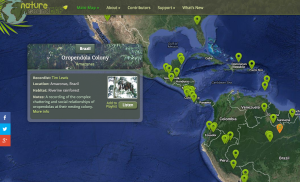 One of my favourite sound maps because of its focus on emotion, giving it a different twist to many other city sound maps.

People submit recordings of locations around Florence, and along with the recording they offer their emotional state at the time of recording, how that sound made them feel at the time.

So as well as a sound map, it’s also a collective map of the emotional states of residents of and visitors to Florence as they see its sights and – in particular – as they hear its sounds. 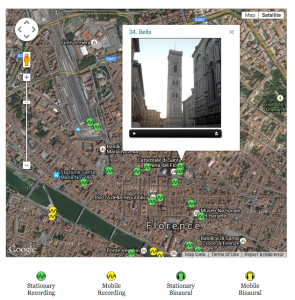 A special bonus mention for our central Cities and Memory global sound map, which now covers more than 100 countries with thousands of sounds – every location on the map features both the original field recording, but also a reimagined sound in which an artist has remixed and recomposed the original, creating a new, imagined alternative sound world alongside the original sounds of the world. 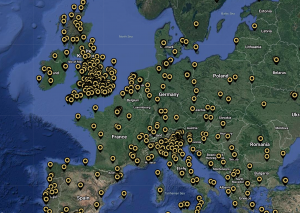 A selection of other sound maps well worth investigating:

– Sound Tourism – Trevor Cox’s map of the sonic wonders of the world.

– URB – A system for ‘automated analysis and storing of an urban soundscape’.

Of course, this is only scratching the surface of all the great sound maps that are out there – so let us know in the comments which are your favourites too!