Over the next couple of weeks we’ll run through the fantastic entries to our Prison Songs project, letting each of the songs breathe and putting them under the spotlight. We’ll also give the artists involved the chance to tell you how and why they approached the song as they did.

First up is the beautiful, plaintive ‘No More My Lawd’, one of the most popular choices from our selection of prison songs – here’s the original, and three fascinating takes on it.

“I felt really inspired to write an atmospheric gospel theme around this recording.

“I have used all of the recording and left it fairly intact apart from a bit of repetition at the beginning and end of the piece.

“The rhythmic sounds all came from within the original recording and used to create a sense of the monotonous work these prisoners were forced into.”

“I took the recording as a lonely and terrified prisoner’s search for God to save him from the horrors of his incarceration.

“My intent was to reassure him that he was not alone and that he will overcome his situation.”

“At the time the No More My Lawd was recorded, the Louisiana State Penitentiary was infamous for a racially prejudicial treatment of inmates likened to slavery, and former prisoner William ‘Ole Wooden Ear’ Sadler (his ear was cut off in the prison) likened it to hell on earth. 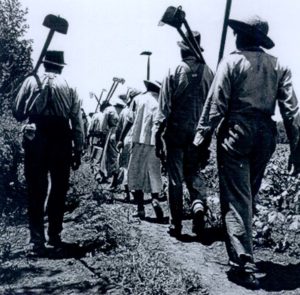 “Asylum seekers to Australia who were detained in the island of Nauru also found themselves imprisoned in a detention facility operated by the private company Broadspectrum (then Transfield). In 2012, an Amnesty team visited the reopened detention centre and described it as “a human rights catastrophe … a toxic mix of uncertainty, unlawful detention and inhumane conditions”. The recently leaked Panama papers identified a culture of secrecy; reporters could seldom visit the island and former inmates described a scenario where staff from Wilson Security would use violence against children with little fear of repercussions.

“In 2013, Australian immigration and border protection minister Scott Morrison directed departmental and detention staff to change the language they used to refer to asylum seekers who arrived by boat to Australia as ‘illegal maritime arrivals’ (or ‘illegals’) and asylum seekers in detention as ‘detainees’ rather than clients, which was considered by many to be part of an ongoing attempt to dehumanise asylum seekers in public discussion for political ends (4). The conditions at this time continued to be appalling, and after a scathing assessment from the UNHCR identified that the environment was unsustainable and that transfers of children should be halted, Morrison responded “we disagree with the UNHCR’s assessment on that”.

“The recordings in this piece include the voices of those who are not only imprisoned, but also deliberately marginalised in some of the most secretive or remote parts of the world.”