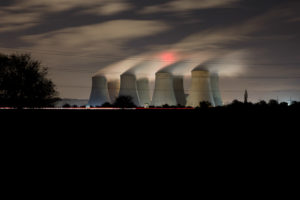 Today’s photograph and sound pairing are from northern England, with this stunning image of the Drax power station by Alan Silvester, with a sonic composition designed around the image by Stephanie Merchak, who writes:”

“The photo of the Drax coal power station, one of the most polluting power stations in the UK, automatically made me think of something harsh and dark. That’s what I tried to render with sound.

I also wanted to use sounds that would remind the listener of electric arcs and sparks. In order to achieve that, I decided to use data bending.

I imported the photo into Audacity as RAW data and exported it multiple times as audio files using various algorithms. I then imported those audio files into Ableton Live and used them as the basis of my track, processing them, cutting them into small pieces and arranging them into a structured track.”