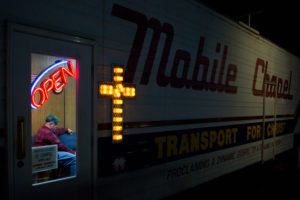 Today’s striking image by Lauren Pond is of a trucker chapel in Ohio, USA – she writes:

“Truck driver Ben Blackburn participates in Bible study at a mobile chapel at the Lodi, Ohio TA Travel Center in October 2013. Transport For Christ, an international trucking ministry, has placed dozens of these chapels at truck stops across the U.S. In addition to providing worship services, the chapels serve as an important source of support for drivers, who face numerous challenges in their lives on the road.”

“I’ve chosen a photo depicting Mobile Chapel ‘Transport for Christ’ service in USA. Mobile Chapel’s initial idea was to minister to truck drivers. Thus, through my composition, I wanted to fill the church into the truck and depict it from the perspective of the driver.

“My first step was to consult my friend, who is an international bus driver, to learn how his work environment sounds, to be able to recreate the authentic soundscape of the inside of the vehicle. My next step was a recording in church during the mass for the Polish youth in Lithuania. As this particular Mass is aimed mainly at the youth who also actively participate in the Mass, I was able to capture the energy and vivacity that fills the church and the sermon.

“Technique-wise, I was using Ableton Live 9 Suite to create a live time performance from the samples I’ve recorded, which I then combined with the ‘truck environment’ I’ve created from my recordings, as well as samples from https://freesound.org/.

“As the road, drivers job and the structures of the Masses are all highly repetitive, the structure of my composition is cyclical and can be played in a loop. Throughout it, one can experience both environments (the truck drivers trip and the church) simultaneously, as the sound literally depicts the ‘Transport for Christ’.”