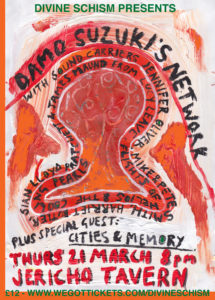 We’re really happy to announce that this year Cities and Memory will be performing live for the first time – and our first live show has just been confirmed for Thursday 21 March in Oxford, UK.

Excitingly, we’ll be opening up for Can legend Damo Suzuki, as he returns to Oxford with his “never-ending tour”, playing an improvised set with local sound carriers.

We’ve had the honour of performing alongside Damo in a couple of our previous musical incarnations, and it will be very special to play on the same bill once again.

Our live show will be a performance of live ambient and electronic music constructed from the sounds of the world, featuring some of our highlights from the last few years of the project.

The performance will include sound pieces built from the sounds of Alpine church bells, nightingale song, Formula 1 car engines and even the inside of the Sistine Chapel. Accompanied by live visuals, the show will be one for fans of Fennesz, Stars of the Lid and field recording.

We’ll be accompanied by specially-programmed live visuals designed to complement each track.

Here’s the Facebook event for more information and tickets are on sale now.