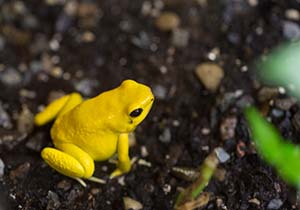 Artist description:
Golden Poison Frog - The Golden Poison Frog is of the species phyllobates terribilis and is found in the pacific coastal regions of Columbia. It lives in areas of the rainforest with very high rain levels of about 5m per year, temperatures of at least 26°C, and relative humidity of 80–90%. For such a brightly coloured tiny frog, it is deceptively dangerous, as it is the most poisonous thing on the planet, where the secretions from it’s skin could kill up to 10 men. However, it is used by the indigenous people of the rainforest, who use the poison on their arrowheads for hunting. As with many of my tracks, I wanted to create a sound story based on the image and in this case I imagined a tiny yellow frog sitting in the undergrowth during a heavy downpour in the Columbian rainforest. I used sounds that were recorded in amazonian rainforests under creative commons 0 licence or created on synths to sonically represent different types of rain, falling through the canopy, rainfall on tin roofs and heavy raindrops. There is a lot of noise, particularly the Piha bird in the distance. I also found a recording of a charango improvisation, which I felt loosely represented the area, as well as rain. As Museleon, many of my tracks are created based on the close connections I feel between sound and image and in this case I wanted to explore the link between the colour yellow and sound. I read an article about a Parisian Jesuit priest named Louis Betrand Castel who in 1730 built his own Ocular Harpsichord. “This consisted of a frame with 60 small coloured windows that sat above a regular harpsichord. Each window was covered by curtains which in turn were connected to an individual key. Whenever a key was struck a curtain would open revealing a coloured window that corresponded with Castel’s theory relating colour to sound. According to Castel the colour yellow related to the note E”. The sound of yellow is apparently one of pulsating energy, lightness and is also luminous. I mainly used the note E as well as sounds that tried to mimic these qualities. However, the overall track ended up having a melancholic air. The tiny frog with high guiro voice, sits in the rain, chirruping, as in it’s world it has no threats. Unfortunately, it is oblivious to the many dangers there are to its habitat.