Our series of city sound guides takes us to Tirana, Albania, courtesy of guest contributor Rafael Diogo, who takes us on his own sonic tour of the city – this is the Tirana city guide, so take a listen to hear the best sounds of this city. 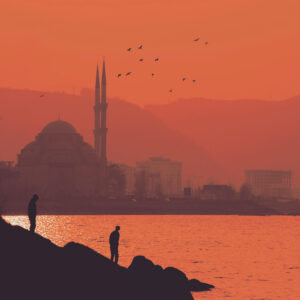 Tirana is one of the best-kept secrets in Europe. Although reflecting on the past isn’t always easy for Albanians and the shadow of dictator Enver Hoxha may still loom large over Albania, in recent years a number of sights exploring his dark history have begun to emerge.

There is a great number of cultural activities to do in Tirana and it makes it the perfect base to start to explore the unique sounds that encompass the wonderful country that is Albania.

This tiny little capital sounds like a collision between the old and the new, where the newer sounds of the city compete with the sound of street vendor’s chants and muezzin’s calls ringing from the mosques, and is becoming one of the emerging cultural capitals of Europe.

Driving in the centre of Tirana can be a frustrating experience. Heavy traffic jams can leave you stranded for hours.
The Albanians also have a reputation for being quite eccentric drivers who like to throw the rule book out the window. In conditions like this and because the city is small, it often makes far more sense to walk.

It is easy and quite safe to wander the city streets and this also allows you to be immersed in the unique soundscape of the city, seeing and hearing all that it has to offer.

For some sights however you will need to get a bit further out of town and this is where a taxi ride can come in handy. Although my trip to Tirana took place right in the middle of the pandemic and the streets were far emptier than would usually be, which added a unique and special quality to the city’s atmosphere. I think this comes across when you listen to the sounds that have been captured. Like a unique fingerprint these sounds are unique to this city and tell it’s story to those who know how to listen.

The grotesque communist-era buildings are one of the main attractions in Tirana and inspire me to go looking for new intriguing sounds and exquisite reverberation textures.

My first stop was the infamous old soviet pyramid. The pyramid is right in the middle of the city and personally was one of the buildings that attracted me the most, ​resembling an enormous UFO that’s broken down in the city centre.

The pyramid was primarily built as a museum devoted to Enver Hohxa but after communism ended, it became forgotten. The soundscape highlights a soundwalk around the pyramid, mainly capturing the sounds of debris and different materials that reflect the state in which the pyramid was left or in its current vandalized state.

Albania is a secular state, and therefore does not have an official religion. Albanians are known to be highly tolerant towards the religions of others, and therefore believers of various faiths peacefully coexist in the country.

Arabs who raided parts of the region in the past introduced their religion to the area and gradually, Islam grew in the country and Albania became one of the two countries in Europe that has a Muslim majority. I stayed in a major Muslim neighbourhood and fortunately was able to capture the moment of one of their five daily prayers.

The call to prayer ringing from the minaret of the mosque echoes in my ear each time I attempt to describe an experience in Tirana. The loudspeakers can be heard as far as 5 km away. They are used to empower the muezzin’s voice to transcend a modern city’s noises and so dominate this recording.

Many wouldn’t think that Albania would become a great tourist destination one day and that these bunkers would have played a role in that. The major question that pops into our heads is why there are so many bunkers everywhere?

Well, it was due to national propaganda perpetrated by the communist regime. Fearing invasion during the Cold War, Albania’s leader Enver Hoxha forced his country to build tens of thousands of bunkers. Long after the regime’s collapse, many still remain and are now overgrown and left alone in the landscapes of Albania, lined like unearthly statues in deserted environments.

There are plenty of intriguing bunkers to visit around the city and this soundscape reflects just one of these abandoned lonely hulks standing throughout all weather conditions eroding grain by grain. If you listen to this haunting recording while looking at the photograph you can feel what the photograph cannot: a living presence across a duration of time.

To understand Albania’s history it is imperative to visit t​he ​giant bunker built to protect Enver Hoxha and his inner circle in the event of an atomic attack, the museum and contemporary art space Bunk Art museum.

The bunker was built between 1981 and 1986 as a shelter for top interior ministry officials and was big enough to easily hold hundreds of people. Now The museum and art space reflect the city initiative to use culture to celebrate the birth of a new era, whilst remembering its intense past.​ ​The​ underground long and reverberating dark corridors are ​accessed along a creepy 200-metre tunnel that blasts out eerie soundscapes, almost ​resembling a dark movie. A lonely walk through the ​subterranean labyrinth ​tunnels makes you ​descend into ​a musty five-storey bunker that feels like it was abandoned the day before.

It intends to ​unearth the memory of tens of thousands of people who were imprisoned and executed by the communist regime as an acoustic experience of intrinsic value.​ ​An excellent re-imagining of a Communist-era nuclear bunker scenario through sound installations that can inspire the work of a sound designer like myself.

So whether you’re spending a day or a week in this city, now you have a glimpse of the best places to go and be immersed by the multitude of surrounding sounds that Tirana has to offer.