Well-Being Cities is a unique collaboration between Cities and Memory and C40, a global network of mayors of nearly 100 world-leading cities collaborating to deliver the urgent action needed right now to confront the climate crisis.

Artists reimagined a curated selection of field recordings from 36 countries around the world to develop brand new compositions on the theme of sustainability, equity and well-being in cities. The project launched at the C40 Summit in Buenos Aires in October 2022.

Listen to the field recordings and compositions on the interactive sound map below – hit the “info” button to read more about each sound.

Find out more about Well-Being Cities

What is the project?

Well-Being Cities asks artists to reimagine one of a curated selection of urban field recordings to develop a new composition reflecting on the following questions:

Thirty-five artists from 14 countries all over the world were chosen from a global open call for applications.

Each has taken inspiration from a field recording from one of 36 cities around the world, including 21 of the C40 cities themselves.

Just as varied as the musical and sonic approaches taken are the thematic addresses of the project’s central questions. Compositions reflect on the impact of the Covid-19 lockdowns, climate change, the homogenisation of the modern city, rising urban noise levels, the incorporation of sound into city planning and the collision of the modern with the traditional.

At the heart of the project is this central composition, built from elements of many of the contributions to the project, and telling the story of an equitable, sustainable city through sound.

Here you can listen to the composition in full, with or without an accompanying video:

Read about the central composition

At the heart of the project is one central, 21-minute composition entitled “Well-Being Cities”. This composition is built from a selection of the reimagined compositions and original field recordings to create a coherent musical narrative that takes the listener on a journey through the themes addressed by the project.

We begin, as many great novels do, in a train station, as we commence our journey in Ho Chi Min City and Kigali with two piano pieces that ask us to take a breath and consider how noise invades and permeates our urban environment.

In France, we pause to meditate and think about those spaces in a city that truly invite reflection, quiet and peace, and how these can be preserved and cherished.

From here, the piece takes a darker turn, as a potential nuclear threat emerges, mixed with considerations of defensive architecture, smart cities and the climate crisis.

Heeding the warning of today’s young people, the piece moves on to ask us how we can work together to co-create a sustainable city that priorities health and well-being, by learning from one another – and, crucially, learning to truly listen to our cities.

Finally, as the pace and urgency picks up, our Well-Being Cities journey ends in the unique urban environment of Venice, running through a rapid-fire wishlist of desires, from community and energy-saving to creative spaces that offer something for everyone.

We end on a note of hope and commitment from the “can-do generation” to work together for the benefit of those around us – and those who will follow us.

A specially-created physical sound installation presents many of the sounds from Well-Being Cities at the C40 Summit – you can listen to the full installation here (headphones highly recommended).

More about the installation

The Well-Being Cities sound installation is an hour-long interactive tour across 31 countries, starting with the furthest from Buenos Aires in Seoul, with each destination one step closer until we arrive at our host city with the final recording.

To recreate the effect of the installation, we strongly recommend listening through headphones 🎧

On one side of the installation space, you will hear an original field recording from that city, documenting a moment in its life.

On the other side of the space, you will hear a reimagined composition built from that original recording, with each artist inspired by the source material and the question of what constitutes well-being in a city for them.

The pieces change in sync, so the field recording and reimagined composition change to the next destination at precisely the same time.

By physically moving around the space, the listener is able to create his or her own sound mix by proximity to either set of speakers, focusing on the field recording, the composition, and how the two blend with and interact with one another. We invite the listener to participate by immersing themselves in the sound and exploring how 31 artists have reinterpreted the sounds of 31 cities.

The recordings and compositions you will hear are listed in the timecode below.

This album compiles some of the highlights from the project as a free download/pay-what-you-like release – essential listening.

This video was used to introduce the second day of the C40 Summit.

The field recordings featured in the project were recorded by: 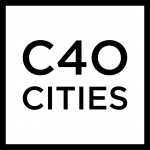