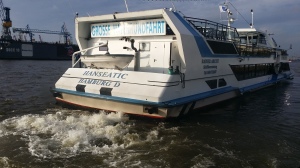 Tourist boats leaving the Landungsbruecken are like yellow taxi cabs in New York City or planes landing at Heathrow – a non-stop procession of chugging motors and swirling wash. The Landungsbruecken are one of Hamburg’s most iconic sites – fully 700 metres of floating dock, hosting everything from fish restaurants and tourist boat trips to a range of museum ships for tourists to climb aboard and explore. It’s busy, it’s unique and it’s typically Hamburg, so we decided to spend an hour here recording various sounds to offer up to our doughty crew of remixers.

First up is Matt Chapman Jones, who recalls that “somehow the recording made me think about what it would be like heading out onto a boat with debilitating agoraphobia, so here is a sonic response to rising fear and anxiety.” Interestingly, as La Cosa Preziosa’s sound will recall shortly, two of our sound artists who picked out boat sounds did so out of a sense of claustrophobia, fear or downright dislike of boats and have created something with their negative response to the sounds, rather than because they’re fans of boats or harbours. Interesting to hear two artists from such different backgrounds get a similar sense from such sounds.

listen to ‘Tourist boat departs from Landungsbruecken’ on audioBoom

listen to ‘Harbour horror by Matt Chapman Jones’ on audioBoom