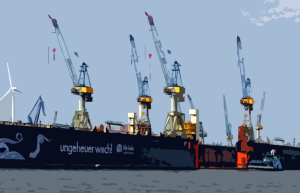 Our final stop on the Landungsbruecken is with sound artist Laurence Colbert, who’s taken on another of the distinctive sounds the structure makes as it sings along to itself – this time, the clanging of one of the sections joining two parts together down by the tenth bridge. Here, he explains his approach:

“For this Cities and Memory Hamburg remix, I used perhaps five samples from the original recording of the Landungsbruecke clanging metal floating platform.

“Although it is of course possible to create an entirely new piece recognizable as ‘dance music’ from any arbitrary field recording, I wanted my remix to emerge from the original, but to perform the ‘trick’ of using only elements found in the original. Therefore the rhythms can be heard in the platform movement itself; but also the bass and keyboard sounds are created from the waveforms of the clanging metal platform. I kept it simple; I didn’t have much time, and I took my direction from what came from experimenting with sounds from the location, rather than imposing a new song upon it.

“If we can create instruments from any sounds we hear, any sounds we record, in the real world: then this, for me, is the epitome of creative freedom. John Cage took all immanent sound as music – yet we still struggle with this, perhaps in a similar way to that in which the brain struggles to comprehend the concept of infinity. Yet in the present: the sampled use of waveforms from field recordings makes an abstract theory such as Cage’s immanently plausible.

“As an avid field recorder and listener, I’ve always believed in the controversy of Jaques Attali’s Politics of Noise. With the use of Ableton’s Simpler and the relevant technique  Attali’s philosophical postulation becomes a powerful and exciting creative reality. Many of the remixes you will hear in this Cities and Memory project will create all of their musical ‘instruments’ from the waveforms of the associated field recordings.

“In noise can be read the codes of life, the relations among men. Clamor, Melody, Dissonance, Harmony; when it is fashioned by man with specific tools, when it invades man’s time, when it bcomes sound, noise is the source of the purpose and power, of the dream – Music. (Jacques Attali)”

listen to ‘Clanging metal platform on Landungsbrucken’ on audioBoom

listen to ‘Laurence Colbert and the Landungsbruecken’ on audioBoom