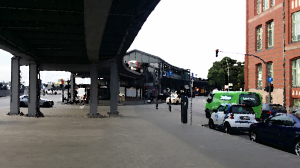 During my time in Hamburg, I was fortunate enough to be accompanied for some of the time by FieldRecording.de’s Sebastian Thies-Hinrichsen, who kindly showed me some of the sights of his hometown, and came up with some excellent suggestions for field recordings. Thanks to him, later you’ll hear the Old Elbtunnel, earlier you heard the beach at Blankenese, and this sound from under the tracks of the S-bahn at Baumwall was highlighted by him as a typical Hamburg sound, so I went back and caught a good clip from there. And for those of you who can read German, here’s an article on his great site about #Hamburgsounds.

Onto the Baumwall sound, and we’re off to Los Angeles, as the west coast of the USA takes on a classic Hamburg sound. Nick Campbell, AKA Wages, returns to Cities and Memory, and describes how he approached his reimagination of this sound:

“I was drawn to the calming rhythmic nature of this sound clip. The passing cars and trains created a variable drone, that rose and fell, while a light clicking (I’m guessing from the train tracks), created a consistent rhythm that made it all musical.

“I approached my remix wanting to create something without altering the natural musical nature of the audio clip. For that reason, I didn’t utilize any effects or any sounds not already in the clip. Rather, I took specific moments from the clip to create more concrete rhythms and musical movements. This allowed the remix to still be a total reflection of the sound of Hamburg, totally untouched, just re-organized.”

listen to ‘Under the train tracks at Baumwall’ on audioBoom

listen to ‘Baumwall, reimagined’ on audioBoom