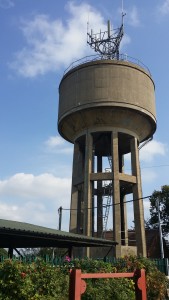 A recording we picked up on our local travels today – there’s a fascinating architectural salvage yard at Milton Common in rural Oxfordshire, full of ancient gates and archways, old telephone boxes, disused bits of film set and so on (it’s well worth a visit if you’re ever in the area). At the back of the salvage yard is a huge concrete tower, which would seem to be a water tower, but with several radio attachments at the top, which emits warm, full, pulsing drones out into the air, which we recorded using just the mobile phone we had at the time. The tower of drones is like something from a mundane, Oxford-based version of War of the Worlds.

Andy Lyon chose this sound as his source material for our Oblique Strategies project, and was allocated the cards Do something boring and Focus on the flaws. He writes:

“I took the sample and chopped it into 12 equal parts. The length of sample is 1m 27s = 87s so each section is 7.328 seconds. I subsequently found that not all lengths were equal and I have no idea why because all of the timings seemed ok.”

“I used a Paulstretch on samples using 12 intersections and 0.7328 interval in line with the numbers for the initial sections and then used this as a drone but the note is not continuous, has more of a random pattern.”

“I used ‘Serenity Free’ VST with the Heart of the Statue preset and TAL Reverb 2 airy mono plate preset for a drone chord and played a simple melody over the top. I then played four of the joined samples in sequence twice with a series of different delays. I left them as they were without further processing.”

“The boring strategy was to use arbitrary lengths for the chopping the sample into sections and then joining the odds and evens together. I also used a number of presets without additional processing and randomly assigned delays to different samples. Because I didn’t edit the chopped samples to fade in / out etc these flaws from the arbitrary chopping are focussed on when these samples play.”

listen to ‘The tower of drones’ on audioBoom