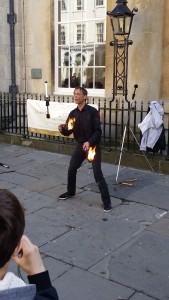 Today’s piece is one of the more radical reimaginings we’ve done.

The original field recording is a street performer eating fire outside the abbey in central Bath, in front of a large crowd of bystanders.

A consummate performer, he had his stage chat down to perfection and clearly has the crowd eating out of his hand, waiting for him finally to eat fire at the climax of his show. At the very end, he implores the crowd to leave him a donation, saying ‘the more you give, the longer I can live’.

The field recording brought to mind a wonderful quote by Laura Esquivel relating to our dependence on other people to make the most of our lives: ‘Each of us is born with a box of matches inside us but we can’t strike them all by ourselves’. The quote was directly linked to fire, so it had some relevance to how I might reimagine the sound – in fact, the quote suggested to me exactly how I should reimagine the sound.

Next, it was a case of showing how this quote could apply differently to different people, so a quick call out via Twitter brought in fantastic contributions from 20 people, delivering the quote in four languages.

A timestretched section of the fire eater’s ‘the more you live, the longer I can live’, effected and layered, formed the bed for the piece, over which I layered the vocal samples and two synth lines to create the reimagined piece you can hear below.

listen to ‘Fire eater outside Bath Abbey’ on audioBoom