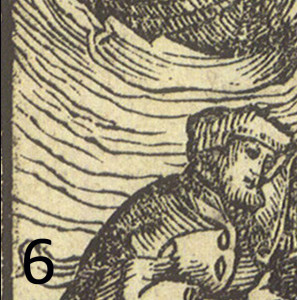 Continuing our journey down the map of Utopia, we come across the figure of More’s narrator Raphael Hythlodaeus, who is the figure of focus for today’s part of the journey.

“I focused on the name of the narrator “Hythlodaeus”. The master of trivialities and nonsense (sort of the meaning of the composite word) contrasts his role in the text.

In that sense I used recordings of various instances of everyday life as small talk from the street, random voices and I used them along a speech by Noam Chomsky and a recipe for a cocktail by a mixologist (first search on YouTube).

I then digitally stretched the voices beyond recognition and added organ sounds.

With the end result I wanted to target the way we perceive things outside of their context, I wanted to stereotypically almost invoke mysticism and superimpose it with what is generally perceived as important in different social backgrounds and lifestyles.”

Reaching beyond the coasts of Utopia by Tim Shaw, London, UK

“This corner of the map is seemly far from the land of utopia but most who seek the island travel across these waters.

Even from here you can hear the washes of angelic sounds resonating from the land.

Using a variety of field recordings, sound synthesis and processed found sounds this piece shows how the influence of the island reaches beyond its coast.

The composition is made up of a variety of water recordings I have collected from different locations around the world.

We hear the complexity of the sea from different distances, hydrophone recordings of rivers and close mic’ed records of streams.

Early polyphonic music, composed in around 1518, has been appropriated and cross synthesised with the sounds of the sea.

Additional sound design was done with sound synthesis in Pure Data. Towards the end of the composition we hear the wise voice of Rafael.”