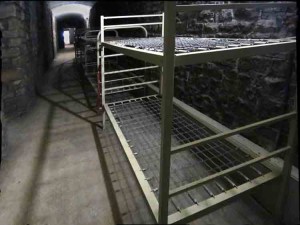 Following our Dada Sounds project, we’re back to ‘business as usual’ for Cities and Memory for a while, and we’ve had some excellent submissions of reimagined sounds and places in the meantime.

The first is from Cardiff Castle, a medieval castle in Wales that also hosts regular exhibitions inside its ancient stone wallls.

On this occasion, it was a World War 2 exhibition, and as we climbed the stairs, a haunting snatch of ‘We’ll Meet Again’ drifted down the corridor.

This was taken on by Bristol-based artist Ellen Southern, who created a new piece like this:

“I chose a recording made at Cardiff Castle as the basis for a sound work, as it has an interesting vocal element (echoes of a recording of Vera Lynn singing the evocative war-time song ‘We’ll Meet Again”), and as Cardiff Castle is somewhere I remember from a visit as a child growing up in Wales. This combination of voice, nostalgia, intrigue and acoustic atmosphere drew me to the recording.

“In considering where to site my response, I quickly thought of what to me is an acoustically similar space in Bristol, where I live: the Trenchard Street multi-storey car park. It is an imposing, resonant, stark, grey, brutalist building in the city centre, which is quite surreal to wander around at night, even feeling slightly edgy to be alone in.

“This building seemed apt also because such buildings were often built on bomb-sites, and this particular one stands where, on the 2nd of November 1940, bombs destroyed The Prince Theatre, leaving no visible trace that it ever existed on this site.

“This ghostly link between a lost place of popular performance and an emotive song so connected to the second world war, seemed a potent combination.

“So, I went to the car park on a cold night with my field recorder and the song lyrics, and used the physical distances of the place itself to create spatial vocal effects using the acoustics of the site.

“I didn’t sing the consonants in the lyrics, so as to increase the ‘muffled’ and distant feel of the voice, like an old recording, or a half heard and half remembered song.

“I used the bleak, windswept car park platforms, and the stained, resonant stairwells to experiment with the sounds of my movement and my voice.

“I also captured the voices of passing party-goers, and a persistent low flying helicopter, which added quite fitting droning plane sound to the resulting work.

“I edited together the resulting recordings, maintaining the natural variations in distance and volume, and crafted them to transform from a lone solo voice into a dislocated chorus and crescendo.”