A striking solo performance today, half song, half monologue in the form of ‘Whoa Buck’ – here reimagined by Laurence Colbert from Oxford, Jeff Dungfelder from NYC and Marco Alessi, who sent in just a sound and his name, so remains a mystery composer. 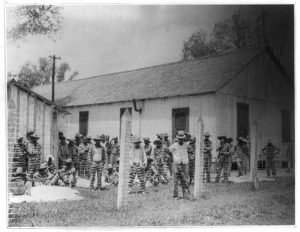 “It is impossible to separate the blues and industrial revolution in America. The music and the voice always transcended the painful reality experienced – and the context in which the music was made and sung.

“I hope that the interplay between noise, industry, music, blues, and rhythm is apparent in this version, which also celebrates the gritty resistance through uncomplicated ‘good times’.

“I chose this field recording mainly because of the elastic vocal ability quality of the singer, and the incredible sounds and bends he makes with his voice while telling the story in the original recording. I liked the vibe of it. ”

You could do anything with this voice, but hovering harmonically in the same area, the original fitted well with the track which I made for it.”

“After completing my first memory version of this field recording in a dark lo-fi noise vein loosely based on Edgar Allan Poe, I asked myself what it might be like if these words existed in a deep beat driven after hours underground world.

“I wanted to take them completely out of the blues/prison context and view them as a part of a late night groove headspace. At the moment I was inspired by reading a quote by Pablo Picasso: “Every act of creation is first of all an act of destruction.”

“So I guess I ended up destroying my own memory version and reimagining “If The Rest Was Dead.” You could say I took the sonic view to get there.”