‘They’ll Miss Me When I’m Gone’ is another of the moving prison songs recorded in the 1940s that artists have reimagined – here are two very different takes from Ireland and the USA.

“I heard a theory about the music of the south or the blues. It outlined the many influences from all sorts of sources, in particular through the mixing of cultures while the railroads were being built.

“Some of the most noticeable influences were Irish traditional Music, African chants coming through work songs, Cajun sounds – bottleneck and steel guitar in particular and even the Chinese scale, possibly heard from the camps of the Chinese workers. 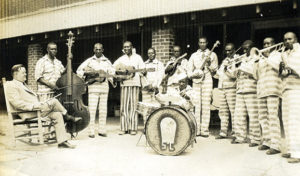 “All these diverse sources blended to make the songs we recognise today. I wanted to disaggregate the history of these sounds and make a piece combining all the originals as part of the reimagining, reflecting all the different peoples who went into the making of the prison song.

“Parallel to this I was rehearsing ‘Spem in Alium’ and when I got stuck in the project, this is what gave me the way forward and the inspiration for the final form the piece has taken.”

“I went for a expansive largeness and sense of infinite time as I imagine the fate of millions of people imprisoned for life.

“Outside the walls of their cell or jail the entire world stretched out in a infinite expanse and yet they remained physically trapped in a confined area.

“On a positive note, the musicians who played and performed this song did live on in one sense as this Lomax recording and as an esoteric remix in 2016.”