Big news for the sounds of London today, as the iconic chimes of its most famous bell, Big Ben, fell silent for four years for repairs and restoration. 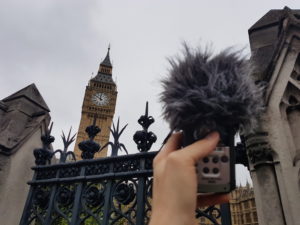 “Big Ben” is the more common name for what is officially called The Great Bell, which was first cast in 1856, and which which rings out (in E, for those interested) every hour. It is, along with the London Underground, perhaps the archetypal sound of the city.

As such, for the bell to go silent for such a long time has been a major news story here in the UK and has caused plenty of controversy.

The final chimes were heard at midday today, as thousands of people gathered to hear them, cheering and applauding as the twelfth chime rang out.

We headed down to record the final Big Ben bongs of 2018, which you can hear below.

And, unusually for Cities and Memory, for such a big moment in sound we have a reimagined piece created almost in real time.

As Big Ben will be silent for four years, we’ve stretched out it sounds (along with a little layering and manipulation) to last for almost twenty minutes – this symbolises the long wait ahead until the city hears this sound again, and also accentuates the sheer beauty of the sound of such a magnificent bell.

It’s a lovely ambient listen, and we hope a fitting tribute to Big Ben – for now.