We’ve been pondering the unanswerable question lately – “what’s the best place in the world for field recording?”

Of course, it depends on so many things – not least personal subjective opinion – but we’re always fascinated to hear about people’s favourite sounds, and favourite sound locations, so we decided to write a few words about our favourite place in the world for sound – Venice. 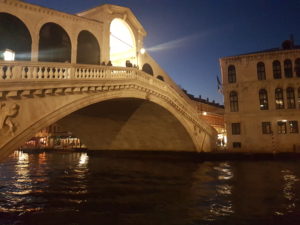 Venice has been something of a spiritual home for Cities and Memory from the beginning of the project – we’ve visited regularly in recent years, and in fact the project takes its name from Invisible Cities by Italo Calvino, in which Marco Polo is seen to be describing his home city of Venice as a series of fantastical, imaginary cities around the world.

It’s a city known around the world for its undeniable visual beauty, and becoming better known all the time for its fabulous cuisine, but we feel like its sounds deserve a long-overdue shout out too.

You can explore the sounds of the city – and their recomposed counterparts – on our Venice sound map:

So what makes Venice so special from the perspective of sound?

What that means from a sonic perspective is that there’s none of that constant low-end pulse that characterises and dominates so many urban spaces, and that gives the sounds of Venice an unusual crispness and clarity, as if it were simultaneously a city and a village.

It’s a city for walkers, and a city of bridges – the clatter of shoes on bridge steps, the clacking of brisk paces resounding along a tiny alleyway. The sounds of walking are as much a feature of the Venetian soundscape as its lack of cars, and are rendered much clearer as a result.

Secondly – and on a related note – Venice exists almost as if frozen in a moment of time (as hinted at by this accompanying sound map which transposes some of our sounds on to a woodcut map from 1500). It has limited urban space which has been more or less completely full for hundreds of years, so rapid urban expansion is off the cards – Venice is more about constant restoration than large-scale redevelopment. Consider this field recording from the Rialto fish market at closing time, which sounds absolutely timeless:

While field recordings from other cities can help to chart the sometimes-rapid change in urban environments, Venice’s sounds are almost classical, standing as if they could have been recorded at any point in a much longer timeframe, and it feels like you have to work harder to find those distinctive soundmarks that relate to a particular time, if not a specific place. Here’s a beautiful recording taken at once of Venice’s famous Biennale festivals, as a boat full of musicians performs a haunting piece in the city’s former armoury, the Arsenale:

Then there are the canals and waterways – the sounds of boat traffic, clanging dock platforms, splashing water and passing vaporettos and gondolas has a very special feel in Venice, when you combine it with the particular resonance and atmosphere of a carless city. The sounds of waterways in Venice have a quotidian quality in that they help to define daily life in the city, and yet the stranger’s ear is inevitably drawn to them as intriguing and even alien, certainly in such an urban context:

Venice boasts hundreds of churches – from the outright magnificent like the basilica of San Marco to altogether smaller churches. These spiritual spaces all have their own character, from the colossal boom of the Campanile in Piazza San Marco, to smaller but still ancient bells full of richness and character. Venice is by no means unique in this regard, of course, but there remains a certain something about the sound of these sacred spaces in the context of the design and construction of the rest of the city.

Perhaps my favourite field recording from the city was taken from a palazzo rooftop at dusk on Christmas Eve, as the bells began to chime the hour from all sides at once, filling the air with the most beautiful cascades of simultaneous bell sounds, marking the hour just as Venice has always marked the hour, and just as it always will. It’s still a “hairs standing on end” moment to listen to it now:

If you get bored of the mainland or find the throng of tourists in high season a little too much, it’s simple to hop on board a vaporetto and visit another of the Venetian islands, which each offer a different range of sounds too – from the glassmaking industry famous on Murano to the tranquil, almost rural soundscapes of the furthest island, Torcello. Even the Venetian public transport, the vaporetto, moves to its own rhythms of docking and undocking:

With all the incredible beauty of the city, of course problems come too – primarily in the form of a) too many tourists crowding the same streets on the same route from the station to the Rialto Bridge, to Piazza San Marco, and b) vast cruise ships thundering into the lagoon, depositing thousands more people for an afternoon. As well as the more serious impact in terms of damage to the city, this can make getting a sonic snapshot of the “real life” of Venice instead of the cartoonish tourism and all the impact that comes along with it, can at times be challenging – Piazza San Marco is often a chaotic Tower of Babel.

It’s invariably more satisfying to ignore the classic soundmarks of the city to get lost in its back alleys and hear something more of the “real” Venice. Perhaps one of Venice’s beautiful little bacari bars serving baccalà and prosecco to locals, or maybe you’d stumble across a bookshop made of gondolas filled with books, opening out onto one of its canals…

To this end, our final sound is a recomposed piece that forms a sonic warning – we transformed the sound of some of Venice’s bells into the dull, potent throb of a cruise ship engine to symbolise the damage being done to the fragile Venetian ecosystem by an industry on which it relies, but which is slowly killing it.

Venice, then – a city like no other, and that goes for its sounds just as much as anything else.