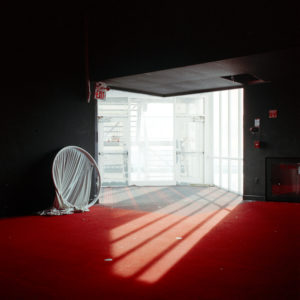 Today’s image is from an abandoned nightclub in Toronto, by Richelle Forsey: “This is a photo inside the decommissioned and semi demolished nightclub ‘Atlantis’, on Toronto, Ontario’s waterfront, on the coldest January 1rst (2018) on record. I document abandoned spaces, seeking to uncover the energy these spaces resonate with post occupation.”

The photograph has been reimagined in sound by the Unsound Collective, who write this about their piece entitled “Dance of the Dust”:

“The sound composed for this photo is an improvisation inspired by the pictured elements, a long and evolving soundscape which wants to take the viewer through different moments of the building’s life. The atmospheres require to view different areas of the picture and let that moment speak through the soundscape.

“The photo offers the possibility to learn about an indoor and outdoor space, a continuous, calm and evolving environment outside and a decaying atmosphere indoor, we decided to narrate a story of the invisible protagonist, the floating dust particles which are always there, in a perpetual dance.

The soundtrack is made of 3 main parts:

“Introducing the noises and atmospheres, scattered, warm and sporadically bold, it echoes the past events that took place in the abandoned space.

“Takes the viewer to a different moment, the sound is quieter and longer, trying to reach that horizon in the long distance, outside the window.

“Interference and static noises have witnessed hundreds of hundreds of people and events. This is what’s left. Combined with the calm and vacuumed atmosphere pictured on the outside.”