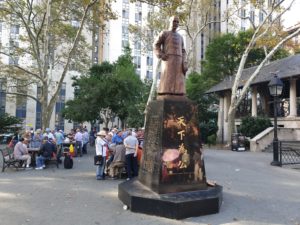 One of our favourite field recordings from a recent trip to New York, this is a slice of Chinatown condensed into one small Manhattan park.

In this fascinating recording, we can hear first a man playing a Chinese string instrument solo, as he teaches his friend technique on the instrument.

Next, we wander around the park where there are tables full of mostly older people playing various board games, betting on the outcomes and discussing the next moves in a very animated manner.

Finally, we hear a group of five or six musicians settling down to play some traditional Chinese songs on an array of instruments, including a small vocal amplifier.

Andy Billington took on this Chinatown recording as source material for his reimagined piece, and he writes:

“The original field recording was chosen randomly but was perfect. It sounded like it was a great day and I wish I was there.

“I took the key melody from the opening few minutes of the original and using a combination of plug ins and live instruments improvised over this with oboe, strings, flute and found audio.

“This was chopped into equal bars and re assembled. Next, I added movement with ring shifter and finally reversed the whole track and pitching down.

“The final recording sounds like a weathered, dream wave, found cassette tape which I imagined might still be there after everyone went home.”