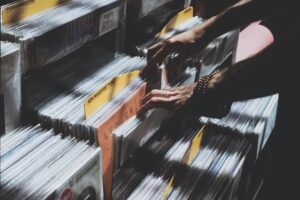 It’s time for albums of the year, everyone. 2020 might have been the most well-documented Bad Year of most of our lifetimes, but, hey – silver lining! – there’s been some fantastic music released to help us get through it all. Here are our top 20 picks for 2020, from mind-melting psych and walls of noise to music designed for a restful night’s sleep.

We’ve linked out to Bandcamp wherever possible, so if you like the sound of any of these albums, do go and support the artists and buy from Bandcamp – and here are our 2019 and 2018 roundups too.

The Ondes Martenot is an incredible instrument that’s been capturing flights of musical imagination since the 1920s, and forming an important part of the early history of electronic music. This album, conceived, written and performed entirely for the Ondes Martenot, is a bit of a treat – part Forbidden Planet soundtrack, part Georges Méliès and still bearing the traces of Varèse and Messaien, Chimeres shows the full range of this beautiful instrument, and it’s a real treasure in which to lose yourself for an hour.

Jónsi’s solo album would sail into our top 20 on the strength of “Exhale” alone, possibly our song of the year and exactly what you might imagine if the very best of Sigur Ros was transferred into an electro-pop setting – it’s a really beautiful experience, and sounds weirdly timeless, as if you’ve heard it 30 times before your first play. Thankfully there are plenty of other highlights to be had – from Liz Fraser’s guest appearance, standout track “Shiver” and the oddly Bjork-ish “Beautiful Boy”. Spoiler – not Jónsi’s only appearance in our top 20.

More incredible work from William Basinski that sounds like it was buried for 150 years, waiting to be discovered. In fact, some of the tape loops here date back more than 40 years, and the addition of hazy, barely-heard vocal lines add a new emotional depth to stunning pieces like “O My Daughter, O My Sorrow”. You always know what a Basinski record will sound like, but at the same time he retains the ability to surprise, and the power to convey urgency as well as delicacy.

First up, this one’s a free download, so go and download it now, OK? Done that? Good. Now settle back for some bliss. This album was developed by Ben Chasny as a response to amnesia by creating “music that doesn’t develop at all, because otherwise the mind follows the development”. I’m not sure I’d necessarily agree, as at the very least your emotional response to the pieces changes through the length of exposure to each of these hymnal, elegant loops, but what’s inarguable is that this is a lovely, warm-blanket experience in the best possible way, during a year that needed more things like this in it.

In which Tortoise guitarist Jeff Parker stops being Tortoise guitarist Jeff Parker and becomes renowned solo artist Jeff Parker, who also happens to play in some band called Tortoise. Bringing together different elements and backgrounds in a sensitive, subtle way is just one of the achievements here, with sequenced beats underlying improvised interactions, and electronic crackles and embellishments adding to the mix, not distracting from it. It’s a wonderfully well-balanced and spacious record.

An album that on first listen made us think “this is quite nice, isn’t it?”, but the more you listen, the more layers it seems to reveal. From murky post-rock stylings similar to early Rachel’s to pieces that it’s nigh-on impossible to describe without using the adjective “shimmering” (we tried! we failed!), this takes harpcore in new directions – and Lattimore has has an incredibly productive year with a number of other released including “Rain Duets’ for harp and synth.

“If you are among the countless individuals who find themselves feeling both dead and alive at the same time, the information contained within may serve as an invaluable asset to your journey.” What 2020 didn’t know it really needed was a hip hop concept album masquerading as a field guide to the spirit world, but Aesop Rock delivered it anyway. Twenty years on from Float, it was great to hear him in excellent form as ever, and there’s still no one that sounds quite like him.

Unearthed tapes of previously-unheard Jason Molina songs were always going to get us excited, but the surprise was how well Eight Gates hangs together as an album in its own right, down to the field recordings of birdsong bookending it. As with all of Molina’s recordings, it’s intensely intimate, like being in the room as it was recorded, but even more so, with offhand remarks left on the mic. Mostly though, it’s a spectral reminder of the incredible talent we’ve lost, and that the world misses greatly.

What an elegant beast Moses Boyd has created here – the blend of programming alongside your more standard instrumental fare, the chopping up of different rhythmic styles and the effortless swing between moods across the album are a joy to be part of. A record that keeps drawing you back time and again, seemingly against your will.

Traditional musicians from different countries and backgrounds, united with a collective fascination in the potential for electronics leads to this utterly compelling release. Songs from Argentina, Croatia, Bosnia and Portugal, arranged with electronically-centred rhythmic backings that take these traditional songs to an entirely new place. One of the year’s most distinctive releases.

10. Radar Men from the Moon – The Bestial Light

Much of this year felt like being clubbed over the head again and again by bad news, and this album was a satisfyingly intense way to release oneself from that. Album highlight “Self” starts with a drumbeat that’s a straight rip from a Shit and Shine live show, and expands from there into a trepanation mantra by the close. Turn it up loud and surrender to it – it’s fabulous.

We loved The Bug’s collaboration with Miss Red so much it was in our pick of 2018’s best records, and he’s right back on form here, with a different, darker and more subtle vibe. The trademark growling, drowning bass and spitting snares are present and correct, but with a sensual edge across the album as well as a slow, crawling menace. One of The Bug’s – and therefore the year’s – most atmospheric releases yet.

This is great! In a year with no shortage of competition and with great releases from the likes of Rival Consoles and Autechre, this was perhaps our favourite straight-ahead electronic release. There’s so much warmth to the sounds on “Translate” that you can practically smell the analogue transistors, but it also retains an energy and a sense of playful improvisation, as well as some big productions.

Ah, our favourite: an album that’s both clever in terms of how it was made, and a joy to listen to. The clue is in the album title – sounds are not what they appear to be, with organic instruments twisted, manipulated and dissolved until they’re no longer recognisable as their original selves, but go together to produce a whole that sounds both electronic and super-lush and involving – take the outstanding vocal manipulations in “Empyrean” as a starting point and work out from there. Fantastic.

This beat out Radar Men From The Moon as our guitar-based album of the year by virtue of being that much slimier, seedier and more repulsive – all par for the course for Sex Swing and intended entirely as a compliment. Each song takes one filthy, disgusting idea and spins it out for an entire track, sheets of guitar, skronking horns, swooshing synth undercarriage and those unmistakeable Daniel Chandler vocals. It’s absolutely wonderful, and a meeting point between The Birthday Party, Lydia Lunch and The Jesus Lizard – the 12” mix.

By far the saddest release of the year, and the one that’s hardest to write anything about. Suffice to say that this year, in Tom Relleen we lost not just an incredible musician, but a wonderful, open and incredibly passionate and driven person, whose musical legacy will live on to remind us all of how special he was. Autotelia is a fantastic album exploring the very outer limits of musical space, and a fitting tribute to Tom, though of course it was never intended that way. Listen and treasure.

4. Julianna Barwick – Healing is a Miracle

Being reminded of the miracle of healing is something we all needed this year, and spending some time inside Julianna Barwick’s temple to the human voice and to healing was one of the year’s most rewarding musical experiences. The meeting point of Barwick and collaborator Jónsi (told you he’d be back) on “In Light” is just perfect, and I defy you not to be moved when the bass synth pumps in at 4.17. Go on, try it now.

A concept album about God-knows-what from Vatican Shadow, with some of the song titles of the year (try out “Uncontrollable Oasis (Real Life Spy Mystery Ends With Scientist Hanged In Iran)”), we kept coming back to these intriguing compositions time and time again – they have a way of hooking inside your head and not letting go. “Moving Secret Money” has no right to be ten minutes long, but somehow doesn’t work at any length shorter than that, and the whole album hangs together with a sense of foreboding that only erupts with the distorted bass sounds in closer “Ayatollah Ferocity (The Refinery At Abadan)”. Totally compelling.

The roundup wouldn’t be complete without some psych madness, and Perhaps provided it this year with two twenty-minute slabs of frazzled, danceable aggression on 7.0. A dozen musicians get together in a room and thrash it out over an assortment of guitars, brass and synths, the flow dictated by the Liebezeit tight-looseness of relentless drum patterns. This is like declaring an open house party inside your mind for a roomful of acid-frazzled maniacs.

Well, album of the year was settled way back in April, the moment Fetch The Bolt Cutters dropped – enough has been written about this record by people far more knowledgeable and articulate than I, but it really is fabulous. The sound of an artist completely at ease with her own process, redefining how she makes music on her own terms, tackling themes that matter and moving outwards the very limits of what’s possible on an album like this. A truly magnificent achievement, and there’s no other contender for our tiny album of the year awards so here it is —-> 🏆