A Cities and Memory commission by Dreamland, the oldest surviving amusement park in the UK, which relaunched in June 2015.

The site of Dreamland (as it was renamed in 1920) dates back to the British railway boom of the early 1860s when, in its original form, the ‘Hall by the Sea’ was operated by the famous circus impresario George Sanger.

The commission is in four parts:

An 18-minute sonic reimagining of Dreamland, incorporating elements from its illustrious past through hours of searching through archive news footage and radio broadcasts, and recordings we captured of Dreamland shortly after its 2015 relaunch.

The piece is built around the following aspects of Dreamland:

We spent two days exploring Margate and capturing the town’s sonic character – you can hear sounds from across the town in the sound map below. 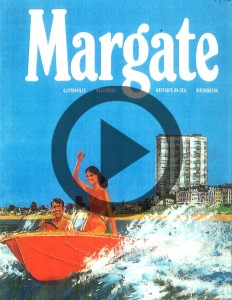 Postcards have been a part of the traditional British seaside holiday since as early as 1894, and have become part of the culture and experience of resort towns and summer holidays.

Here, we update the postcard for 2016 to include audio from the location in question, with this series of interactive multimedia sonic postcards of Margate.

An attempt at exhausting Dreamland

Modelled on Georges Perec’s Attempt at Exhausting a Place in Paris, using sound instead of sights, we wrote down every sound we heard for one hour in location within Dreamland. You can read – and listen to – the results in the final piece here.

The piece explores how human hearing differs from audio recording, as you begin to notice differences between what’s described as the principal sound at any one time, and what you can hear in the corresponding part of the recording.