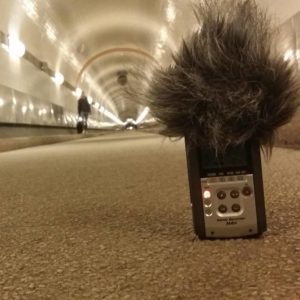 Hamburg is an industrial powerhouse situated on the river Elbe – the second-largest city in Germany, it is without doubt one of the engines of the country. Home to countless businesses and an impressive river port, it is also a city of enormous character – of sport, of culture and arts, entertainment, nightlife and diversity.

How best, then, to define it by its city sounds? What would a typical visit to Hamburg sound like, and what are the essential soundmarks that any visitor should be on the lookout for? Here is our Hamburg city guide:

1. The Landungsbruecken and the docks

Hamburg is defined by the Elbe, which flows through its very heart, and by the port that sits at its centre and has allowed it to play such an important role since it was founded in the ninth century. At the core of this – at least from a casual visitor’s perspective rather than that of a ship’s captain – are the Landungsbruecken piers (otherwise known as the St. Pauli Piers), the city’s largest landing place and a significant tourist attraction. Boats dock and depart all day from the immense floating dock structures, with museum boats, restaurants and other attractions lining the riverbank.

Here you can hear the floating docks bobbing back and forth as the river washes past – reminiscent of the sound of the violin section of an orchestra tuning up in preparation for a concert – and the classic sound of tourists boats going about their business.

A little further out of town is one of the most fascinating sonic tourist attractions in Germany, and a unique feature of the city, the Willkommhoeft. As ships (over 1,000 GT in weight) enter and leave the port of Hamburg, each is given a unique greeting, which is then accompanied by the national anthem of whichever flag the ship sails under. Occasionally the ship will return the greeting by sounding its horn – remarkably, this sonic curio has been operating since 1952, and you can usually find a crowd of curious tourists tuning into the ship greetings at any time of day.

As much as ships are the lifeblood of Hamburg’s commerce, so smaller boats are key to its tourism, ferrying visitors around the classic sights of the city, including newer quarters like the Speicherstadt or past the recently-completed Elbphilharmonie concert hall. The sound of multilingual tourist guides over the throb of tour boats is one of the most recognisable sounds in of Hamburg.

Away from the river, Hamburg has long been known as a city of hedonism and even vice, centred around the Reeperbahn and St. Pauli. In this, one of the city’s best-known areas, lined with bars, cafes, garish sex shops with pumping music, brothels and nightclubs, the sound of late-night reverie is one of the defining aspects of Hamburg’s international reputation (as is well documented, the Reeperbahn area captivated the Beatles on their very first visit decades ago).

Hamburg is also a city fiercely proud of its sporting heritage, with two football teams in the form of Hamburg, and the cultish, politically-charged favourite of the footballing hipster St. Pauli – here are a couple of clips from their Millerntor Station.

Underneath the Elbe is another curiosity – the old Elbetunnel, a underwater tunnel crossing the river first opened in 1911, when it was a technical marvel. It’s open to vehicles during the day, but visit it during the evening when it’s pedestrian-only and the reverb-drenched sonic ambience as you stroll underneath the river is well worth exploring.

The sound of the public transit system is usually, in its own way, as unique to each city as our fingerprints are to our own hands, and Hamburg is no exception. There are two related train systems, the overground U-bahn, which you can hear screeching alongside and above the traffic on its rails, and the subterranean S-bahn, which ferries passengers around efficiently under the surface – here are excerpts of how each of them sounds.

You can explore the sounds of Hamburg – and their reimagined, remixed counterparts – on this interactive Hamburg sound map: