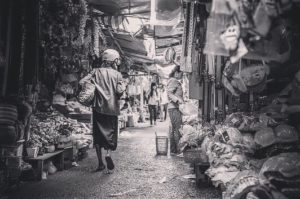 In this special guest city sound guide, come and wander the streets of Hanoi, Vietnam, with Cities and and Memory contributor Rafael Diogo, who writes:

“As travellers, we want to experience all that we can from a country. When you ask people about their impression of a place, one of the first things they will talk about is their cultural values. And the foundation of any strong cultural heritage is the sound that emanates from it.

If you would like to experience new sounds, music, art and even a new lifestyle, then Hanoi is the place to do it. Beautiful scenery, immersive soundscapes, and amazing architecture all combine together in this city.

Like many others, when I arrived I became frightened by the sights and extremely noisy environment of the city, but once I dive into the everyday life of the locals, I too start to be attracted to the fast pace of the old urban city.

Below is the Hanoi city guide for unearthing the sonic artefacts from this ancient urban city.”

“You have probably heard of different markets that open at 8 am and end around 6 pm. Normally, you would buy what you needed in the market during the day and go home afterward. Well, in Hanoi things are a bit unconventional.

Located in the Old Quarter, ​Dong Xuan Market reflects the b​ustle and hustle of a driving society, not merely a crowded commercial point, but also a cultural, spiritual place of Hanoi. T​he market is very diverse and suitable for all interests, with various kinds of goods, such as fabrics, spices and fruits as well as the unavoidable sight of all the pets and rare animals that make their way to the butchers, such as turtles and frogs. This recording features the most visceral part of the market, in which the vendors prepare fish to be sold to customers.”

“Hanoi has a unique tradition of walking through the ancient streets such as Hang Dao, Hang Ngang, Hang Duong and Dong Xuan. These extraordinary ancient streets are located at the heart of the city, the Hanoi Old Quarter.

This is a vast urban area where the streets are aligned to support small-scale business and offer commercial trade, attracting travellers from around the world. To this day you can still see how certain streets are faithful to their ancestors and only sell the unique goods particular to that street.

On these streets you can experience the locals chaotic way of life as you get lost among roads jammed with bicycles, cars, mopeds, vendors and locals crossing from all angles.

Crossing the crowded streets while facing unstoppable honking and incoming traffic may be traumatic for visitors, but clearly not a big problem for the street vendors who move around dauntlessly with their loots, creating a very unique soundscape throughout this binaural aural experience.”

“Not only are the markets open during the day, they open on a specific time for the public during the night. As unusual as it may seem, this has been a tradition and part of the unique culture that attracts travellers to Vietnam.

T​he night market is a 3km long pedestrian road that starts in Hang Dao street and continues all the way to the edge of Hoan Kiem Lake. The crowded roads are blocked at night, so the locals are free to roam the streets in a quieter environment that promotes cultural life, allowing them to enjoy local creative activities.

Suddenly the only sounds we hear in the crowded streets are locals shopping and eating at street stalls along with the sound of Vietnamese folk, which is featured in this soundscape from a street food stall at Hang Dao street.”

“It is very common to see kids playing and riding their bicycles in the streets of Hanoi. They are very social and joyful and are always curious to talk to foreigners, especially college students.

They see it as an opportunity to practice their language skills, as well as impress and entertain their friends with their playful enthusiasm.

“This soundscape was recorded outside the classroom of a primary school after a reading lesson and presents the sounds​ of children as they shout, laugh and play, moving between classes on an average day at school.”

“In Vietnam, traffic noise has become increasingly noticeable and a serious problem in large cities such as Hanoi. It is a crowded city characterized by relatively high noise exposure levels due to the large number of mopeds and harsh horn sounds. ​

If you can survive rush hour traffic in Hanoi, I bet you can make it anywhere. Hanoi, all in all, is unbearable, chaotic and noisy but at the same time fascinating, interactive and alive.

“In this recording the listener can perceive how the city becomes alive mainly in rush hour where the main roads are loaded with bicycles, scooters, buses and three-wheelers which hit the city with a couple of decibels.”

“From dusk till dawn we can see locals having fun playing an ancient game originally from China called Da Cau, which would translate to foot badminton.

Played in most public squares, it is the most popular street sport and most players say they are attracted to the cooperative spirit of the game that helps them to relax after an exhausting day at the office.

“The soundscape reflects the ongoing practice of keeping the shuttlecock afloat among the number of players as long as possible and also knocking it over a net.”