In this special guest city sound guide, explore the city of Hoi An, Vietnam, with Cities and and Memory contributor Rafael Diogo, who writes: 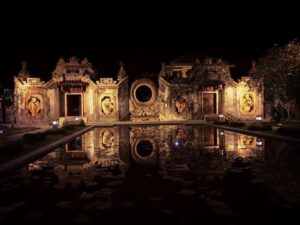 Hoi An is a charming colonial trading port in central Vietnam resting on a stunning coastline. Throughout the 16th and 17th centuries, Hoi An became the foremost port of Vietnam, working as a hub for global merchants from around the world.

The traditional buildings and shops have welcomed foreign merchants since the days when the town was known as Hai Pho, which means ‘seaside town’. Cycling around the yellow-coloured walls of the ancient town or just walking in the morning through the peaceful streets of Hoi An can effortlessly​ turn into a discovery of local, less realized, treasures.

On the outskirts of the city, the rice fields and the unexplored coastline create a nature orientated atmosphere to spot local biodiversity. Hoi An features a laid back and bohemian environment with its elegant bistros and cafés hidden between magnificent trees along the river, creating the perfect feeling to​ let it all go​ and listen to the world going by as featured in this city sound guide.

“One of the most spiritual traditions of Vietnam is the transcendental Hoi An Lantern Festival. History tells that Japanese travellers brought along ​the art of shaping​ lanterns which they use to decorate their homes. Since then, the Vietnese began to replicate their actions in order to bring good luck to their households.

“Hoi An Lantern Festival is a unique moment for travellers to contemplate the creativity of local artists and immerse themselves into the ethereal ambience of such a rustic and ancient city.

“The locals believe that the full moon is a crucial time in the lunar month and believe that the lantern festival, which is held to celebrate the full moon, is the perfect time to meditate, observe rituals, reflect on life and worship their ancestors. The monks will burn incense at their temples while giving a ceremony lit by candles.

“During the night, Hoi An shows a different joy as vehicles and bicycles are banned from the old town and the electrical lights are shut off so the tourists can wander around and soak up the atmosphere as the immense layer of lanterns shine through the darkness.

“This soundscape is an excellent way to experience the sound of locals playing board games outside their homes and tourists enjoying a cultural night as musical performances and poetry readings are held along the river edge.”

“Night markets have their own character and are popular destinations for local people and travellers alike. Hoi An night market is widely known as one of the most joyful markets in Vietnam.

“The night time here becomes very entertaining as most bars and restaurants have karaoke music nights that are held on the roof terraces overlooking the locals decorating their boats with colourful lanterns. The old town transforms into a walking area for the night.

“Hoi An night market is a perfect place for locals and travellers to have a breathtaking view overlooking the Thu Bon river and roam around the food stalls that offer a traditional variety of Vietnamese street food.

“Vendors are selling their specialty dishes such as ​seafood; scallops, octopus, squid and the inevitable frog sticks.​ ​Every sound of human interaction tells a story. As the Vietnamese people go along​ with their daily lives,​ this soundscape resembles how wonderful it is to just be able to take the time to sit back and listen to them.”

“One of the main traditional hobbies of the locals is to build and adorn bird cages. The Hanoi bird market became the centre of creativity where craftsmen villagers whittle the bamboo splints to make the bottom of cages together with making and decorating the brims and assembling the parts, while​ the locals handle the business ​of selling birds, birdcages and food.

“Here I was welcomed to record the sounds by the bird sellers. Sadly a birdcage can contain ten birds, which unfortunately does not leave much space for them to move as is reflected in this recording.”

“The riverside​ remains the lifeblood to this town ​as all the streets in the Old Town run to the river’s edge. The riverside is the main point where locals and tourists gather together during the daylight.

“The view is breathtaking and is the perfect place to relax and have some nice seafood and a friendly conversation with the locals by sipping one of the most intensely sweet coffees in Asia. S​treet vendors with their baskets and layers of paper underneath the vegetables are settled in specific locations further away from the markets and at the river edge to sell their products, which normally include a ready-made broth and mini kitchen on a pole on their shoulders.

“At night, easy-going vendors offer traditional boat cruises to admire the charming lanterns creating a glowing night. You can either buy a colourful lantern to release on the river or​ immerse yourself on a serene boat ride enjoying the​ ​bright full moon.”

“Vietnam might not top the list of the most beautiful gold sand beaches although it does feature a quite stunning coastline along with the quiet peace of the countryside.

“To escape the heat and harsh rays of the sun, it is recommended to come to the beach in the early morning and call it a relaxing day away from the hustle-bustle of the town.

“At Hidden Beach, if you are lucky you can even have the beach just to yourself and meet the local fishermen on their unique round boats.

“Mornings are quiet and suitable for long walks along the beach, although my favourite time is when ​the ​sun is going down.​ Imagine you are sat on a lush, beautiful beach. You feel the warm, tiny sand between your toes and you sit and hear the gentle waves breaking onto the shore.”