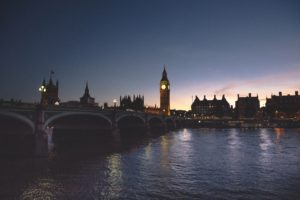 One of Europe’s most famous capitals, and one of the world’s most-visited cities, London is packed with iconic sights, but also fascinating sounds, both traditional and speaking of its illustrious past, and contemporary, reflecting its modern life as a cosmopolitan urban centre. Explore the sounds of the city in our London city guide:

Possibly the most distinctive, well-known sound in London (as well as one of its most iconic sights) is the London Underground – distinctive not just to every tourist who visits the city, but an intimate part of the daily lives of every Londoner too.

It’s been an integral part of London’s soundscapes since 1863, and the various lines and stations have their own particular characters that visitors can come to know and love.

In fact, Cities and Memory dedicated an entire project to documenting and reimagining the sounds of the Underground – you can explore The Next Station in full here.

Our selections here see us waiting on a platform at Tottenham Court Road in central London as several trains come and go past us; on board a train arriving at Great Portland Street with the famous “mind the gap” announcement; and joining tourists asking for directions before listening to a lap steel busker outside Covent Garden.

One of the most famous sights of London is the Big Ben bell tower at the Houses of Parliament – and its distinctive bell is also one of the capital’s best-known sounds.

At the time of writing, Big Ben was in the middle of a four-year restoration project, which has silenced its famous bell, temporarily depriving the city of one of its most recognisable sounds.

Its final tolls before closing for restoration in 2017 drew huge crowds to listen one last time, and we were part of the crowd when it happened – listen to this special one-off event:

London is made up – like many of the world’s major cities – of smaller neighbourhoods in which different populations congregrate, creating diverse, bustling hubs within different areas.

There are countless examples of this across London, covering people from almost every country in the world, but one of the most long-standing and famous examples is the multicultural hub of Brixton, where music, markets and people from all over the world come together to create one of the most interesting places to just stop and listen in the city.

London’s museums are some of the best-known in the world, and mostly free to enter for everyone. The names trip off the tongue – the National Gallery, the Natural History Museum, Science Museum, Victoria and Albert Museum and many others.

Each museum has its own character, and that goes for the sound just as much as the exhibits or the often-striking architecture.

Here you can hear one of our all-time favourite museum recordings, as the clocks strike midday in the dedicated clock room at the British Museum, which is just a brilliant soundscape. We’ve also included the Broadcast Zone in the Science Museum, which has all kinds of sound-powered exhibits to guide you through the history of broadcast technology.

Music is everywhere in London – especially on the streets and in the Underground. With registered busking spots all over the transport network, busking in the Underground is heavily-regulated, and also means that the quality is usually pretty high!

That also goes for busking out on the streets in central London, where the competitive nature and huge volumes of tourists and residents means you can hear buskers of all stripes.

Here are a couple of great examples:

As the political centre of the UK – and with the political climate being particularly febrile in recent years – the sounds of political activism and protest are coming to define life in the city as much as anything else.

Protests can take all kinds of forms – from anti- and pro-Brexit marches and demonstrations against President Trump in recent years, to the G20, Housing Bill, Reclaim The Night and hundreds of others.

Here are a few examples taken from the frantic political life of London in the last few years:

Explore even more of the sounds from our London city guide in our full sound map of the city: