New York is perhaps (if there were an objective method of measuring such things) the most famous city in the world, and certainly boasts some of the best-known global urban landmarks, from the Empire State Building to the Statue of Liberty. Its sounds, however, are a lesser-known quantity – but with such a chaotic, impressive urban centre, it’s little wonder that if you open your ears on a trip to the city, there are some distinctive sounds to enjoy. 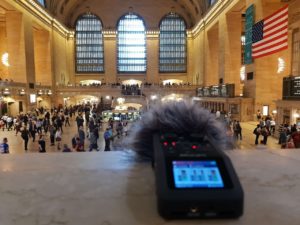 Explore Manhattan in our New York city guide and hear them for yourself:

Everywhere you go in New York, the classic soundmarks are huge amounts of traffic noise, and emergency sirens blaring through the sky. This is particularly prominent in Manhattan, which could almost have been designed as a mechanism for projecting low-frequency traffic noise over huge distances: long, straight avenues lined with tall, hard-sided buildings throw the sounds of traffic all around. The sounds of sirens in midtown Manhattan also have a particular resonance, as the sound bounces off the tall buildings and reverberates all around.

Sitting proudly at the heart of Manhattan is 843 acres of Central Park – still only the fifth-largest park in New York, but certainly its most iconic, and the most-visited urban park in the USA. It’s so large that it has multiple sonic environments within it – for instance, the sound of boating lakes, or of the roads that run through it, or the horse and carriage rides through the park of which tourists and lovers are so fond. But everywhere you go, you hear the tension between the natural and the urban, as the sounds of nature fight to claim their place in one of the most densely-populated urban areas in the western world. In this recording, hundreds of starlings feed and squabble, as you can hear traffic noise on all sides, and even helicopters passing overhead with surprising frequency.

The subway in New York might not be the most famous in the world, and it’s certainly neither the most attractive nor the most efficient, but it’s been engrained into popular culture across the world through its appearances in countless films and TV shows. Fun metro facts – the subway here has the most stations of any metro worldwide, and it was first opened in 1904.

Here’s a subway ride from Washington Square to 2nd Avenue – enjoy the ride:

4. The sidewalks are alive!

The sounds of the New York subway, if anything, are more recognisable from above ground than below it. Because of the way it’s constructed and the ubiquitous street-level gratings all over Manhattan, when a train is underneath your feet, it’s as if the sidewalks are alive, humming, throbbing and moaning beneath you – often accompanied by belches of hot gas coming from below the ground.

Here we are at E48th Street and Vanderbilt Ave, walking along at street level as a metro train sings below us – and listen out for even more car horns:

New York is a fantastic melting pot of so many cultures, which have often sprung up into neighbourhoods all over the city. There are so many of these, each with their own soundmarks, that we could hardly cover them all if we tried, but this is one great example. Walking through Manhattan’s famous Chinatown, the sound recording could almost have come from Shanghai or Beijing, so completely does the character of what you can hear change almost from one block to the next. Here we’re walking past a row of food stores while an almost-exclusively Chinese population does their weekly shopping.

Grand Central Terminal is an amazing space – a cavernous, beautiful space first opened in 1871 that’s sonic chaos at rush hour, the patterns of sound matching the snaking trains of people in all directions. The design is such that there’s also a famous whispering gallery, where a whisper can be heard by someone standing in the right place opposite you.

This is a ten-minute soundwalk around Grand Central, listening to travellers, staff and announcements, and entering and leaving the main terminal so we can hear the differences in reverb between the various spaces within the station.

The High Line is a fairly recent addition to the city – an urban park made from a reclaimed section of overhead train track, and it seems to have been an unqualified success, now sitting near the top of every visitor’s itinerary. And like Central Park, it symbolises the tension between nature and the city – in this clip you can hear the sound of crickets living in some of the bushes and plants on the High Line, but overtaken by the sounds of traffic, helicopters, trains and constant construction (the latter of which would be a New York soundmark in its own right):

It’s garish, it’s touristy, and it’s the very height of crass commercialism – but Times Square is undeniably one of the sights and sounds of the city. Street entertainers, live shows and vendors compete with the traffic and the hundreds of enormous video advertising screens for the attention of tens of thousands of tourists each day. Here are two samples from Times Square – first, street entertainers and passing traffic convey something of the brash, in-your-face nature of this part of town, and secondly there’s some light inoffensive jazz being provided as entertainment for passers-by in the music zone.

New York is certainly one of the most forward-thinking cities in the world when it comes to presenting sound art and recognising the value of sound in an artistic and cultural sense. So you’ll find here with greater regularity than most cities a sound installation or two to brighten up your day. One example is REACH: New York, installed in the 34th Street subway station, or – as you can hear here – Times Square by Max Neuhaus, created in 1977 and still able to be heard today by sharp-eared passers-by in the very centre of the city.