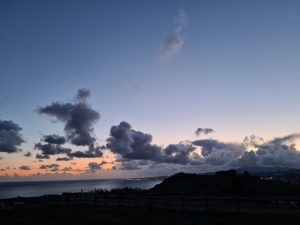 Cities and Memory paid a visit to the Azores islands in the Atlantic, spending a week making field recordings on the main island – creating our Sao Miguel guide.

As our series of city sound guides expands, we present our Sao Miguel guide – our first island sound guide full of recommendations for what to listen out for on a visit.

It’s a nature lover’s paradise, with sounds ranging from unique thermal springs and wild Atlantic waves to crashing waterfalls and the daily chatter of animal life on the island, including birds, cattle and amphibians.

First up is a sound not heard anywhere else in the world – this is a field recording of the geothermal fumarole pools in Furnas in the Azores. These bubbling pools are naturally geothermal, and are used to cook the cozidos stew, which is submerged in pots each morning by local restaurants, cooks through the heat of the Earth and is retrieved by ropes at the end of the day.

It’s a dish – and a cooking method – unique to this part of the world, and as such it’s also a unique and special recording.

Sao Miguel is a wild and nature-filled island with forests, lakes, hills and plenty of places to hike and discover nature. One standout feature is the number of waterfalls on the Azorean island.

Here, on a walk in the forests outside the town of Furnas, we pay a visit to the hidden Salto do Rosal waterfall, from where this recording was made.

Deep in the Azorean forest, we also trekked to the Salto do Prego waterfall to take some recordings of this hidden gem on the island. Recording just above the fall rather than beneath it meant that the resultant field recording was richer and more tonally satisfying.

Next up, we pay a visit to the Cha Gorreana tea factory, which was the oldest tea plantation in Europe, having been on the island since 1883 – and now it is also the only tea plantation on the continent.

The factory still uses traditional methods to process the tea, and in this recording we hear freshly-picked tea leaves from the plantation being poured into a rotating drum, a mixing machine that prepares the leaves for the next stage in a process conducted entirely by hand.

4. Tuning in to the ocean

As an island in the Atlantic, the sounds of the roaring ocean are part of daily life, and different weather conditions and different locations mean that there’s a huge variety of ocean sounds to be heard – and to be recorded. The island is also famous for its trips to spot whales and dolphins, with small rib boats and larger viewing boats heading out from all across the island throughout the day.

Here are a couple of great examples of Sao Miguel’s ocean sounds.

If you go directly south from Caloura, there’s a reasonable chance you wouldn’t hit land until Antarctica. Staring out from the jetty at the end of the harbour in Caloura, looking at the horizon, the sense of the infinite becomes overwhelming, even more than when making a “usual” wave recording looking out at the sea. We refocus, listen more closely and tune into the wheeling birds that occasionally circle overhead, anchoring ourselves back to dry land.

The Atlantic Ocean also crashes onto rocks on the western coast, with a huge unbroken stretch of ocean yawning out to the west for thousands of miles. Here the waves crash with great power and drama onto the rocks, as captured in this recording.

Sao Miguel is also famous for its picturesque lakes, which are an unmissable highlight of the Azores. In this recording, gulls divebomb us from above as we accidentally walk too close to their nesting area along the stony beach of Lagoa do Fogo. You can also hear gentle waves and a light breeze on this fine day.

6. The sounds of nature

Sao Miguel boasts no large cities, with most urban settlements being relatively small villages, and the island is covered in lush pastures, farmland, forest and grass. As such, the sounds of nature are strongly present everywhere in various forms, as the following recordings demonstrate.

First of all, at midnight by a rural pond, dozens of frogs croak their nightly chorus uninterrupted, as a recording device is placed among them and left. All around the pond, voice rise rhythmically and in unison, creating a midnight chorus of frog calls.

At the Casa da Palha farm, we listen on a clear, bright morning to the sounds of cows, donkeys and various birds feeding in the field next to us.

Finally, at a crossroads in the forest near the Salto do Prego waterfall, we stop for lunch among a few proud roosters, a selection of hens and some chicks.

The hens and chicks are feeding close to the microphone of our recorder, while the cockerels crow and jostle for supremacy around us.