Our series of city sound guides takes us to Sarajevo in Bosnia and Herzogovina, courtesy of guest contributor Rafael Diogo, who takes us on his own sonic tour of the city – this is the Sarajevo city guide, so tune in to hear the best sounds of the city.

The beautiful city of Sarajevo is a special place where different worlds and cultures collide creating a vibe unlike any other. 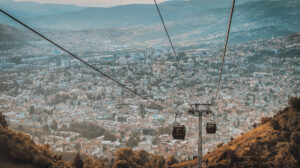 Based on a common past, language roots, and heritage, Balkan people share much in terms of culture, superstitions, traditions, and lifestyle. Balkan people like their drink and they are proud of it. It takes much more alcohol to bring them to a helpless condition than it would for any random foreigner. A Balkan woman prides herself on being able to outdrink any random European.

There is a magic quality in the people and hopefully, the sounds you hear here will bring the authenticity of the city to life.

People from Bosnia themselves are very diverse and different with many influences and it is difficult to stereotype these people. But when travelling across Sarajevo, you’ll notice that there are certain features that you encounter again and again, no matter what street you’re in. Bosnians are friendly people. Bosnians generally have a pretty relaxed sense of time and that’s why they easily start conversations in cafes offering their help to confused travellers.

As you’ll hear in our first Sarajevo city guide sound, popular places to meet among locals are “kafanas” (traditional cafes) and “kafiches” (modern café-bars) According to them, coffee is poured three times, and each serving even has its name: “Welcome coffee”, “Talk coffee”, and the third portion, “Farewell coffee”, politely signalling that it’s time to say goodbye. This soundscape was recorded while having a cafe in one this “kafiches” (modern café-bars), capturing the essence of the city among the music of a street artist playing the santur.

“A lifetime is short for Sarajevo.” Walking around the neighbourhoods is like travelling through time, especially ​Bascarsija​, Sarajevo’s old town. Bascarsija was Sarajevo’s centre of trade and commerce back in the days where each cobblestoned street had its own unique artisan sellers during the Ottoman era. These days Bascarsija has gone from fine artisan sellers and traders to become the cultural centre of Sarajevo and home to many alternative bars and restaurants and also many tourists sites like Gazi Husrev-beg’s famous mosque.

In the courtyard of the mosque, there is a beautiful Islamic fountain. As is customary in Islamic tradition, the fountain is used to cleanse oneself before entering the mosque. This soundscape is much more than an ordinary fountain in the centre of the old town but the sound of water dancing to the rhythms of the city in the background.

The city is sometimes affectionately called ‘Little Jerusalem’ or the ‘European Jerusalem’. Here you will find mosques, Serbian Orthodox churches, Roman Catholic churches and synagogues all nestled within close proximity to one another demonstrating the myriad of different faiths and beliefs that exist in this special city.

Gazi Husrev-beg Mosque is located in the Baščaršija neighbourhood and has the locals say it become an imperial place in the renewal of the Islamic faith after years of Communist rule during which religion did not play a prominent role in the daily lives of Bosnians. As more mosques and other Islamic structures are built-in Bosnia, it will remain critical that Bosnia, and Bosnians, retain and build their own “Islamic identity” through these endeavours.

Marsala Tita street is a great place to start your walking tour of the old city. The people of Sarajevo would undoubtedly agree that the city is like that one friend with whom you always have something to talk about. So, if you want to make friends with Sarajevo, here are a few sights that you simply have to see and immerse yourself in and be guided by the intricate and mysterious sounds that emanate from such an old town.

The sounds of the passing recognisable city trams are one of them much and much more than just a means of transport. Some of the stops are meeting places and favourite gathering places for youth, like the stop at the Central Bank in the centre of town, known as “Čeka” (wait) to Sarajevans. Those who would like to have a glimpse of the trams and traffic noise can immerse in the soundscape recorded in a balcony on Marsala Tita street.

The Balkan identity has an interesting history. The origin of the word Balkan is obscure; it may be related to Persian bālk ‘mud’, and the Turkish suffix a ‘swampy forest’ or Persian balā-khāna ‘big high house’. Related words are also found in other Turkic languages. The term was brought to Europe with Ottoman Turkish influence, where Balkan means ‘chain of wooded mountains’ in Turkic languages. Once you arrive in Sarajevo and look around, you’ll see houses rising from the surrounding hills.

The hilly landscapes enchant with orange roofs contrast with blue sky and green hills, with a minaret announcing the call to prayer. These are Sarajevo’s oldest residential areas. People have long lived in small hillside neighbourhoods, only coming down to Bascarsija to trade. These neighbourhoods often have a mosque. This is so that residents didn’t have to go up and down five times each day for their prayers. Here I walk through steep roads and lose myself along old streets to record this glimpse of Sarajevo’s daily life.