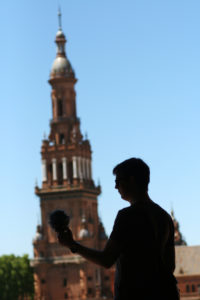 The fourth-largest city in Spain and the principal city of the Andalusia region, Seville was originally founded as a Roman city and today its Old Town contains three listed World Heritage sites, despite only being four square kilometres in size. As well as being a city of beautiful sites and incredible food, there are many distinctive sounds to be heard when you visit.

Listed as an item of intangible heritage by UNESCO, flamenco is synonymous with Andalusia and Seville – everything from the music and dance through to the outfits and venues are absolutely iconic. So it’s the perfect start to our Seville city guide, where you can take in flamenco in all sorts of different places. Here are two field recordings, one from the more touristy Museo del Baile Flamenco, and the other from the much more traditional venue across the city, La Carboneria. The sound of heels slamming down on dusty boards and the passion in the singing and dancing really come through in these pieces:

2. The horses of Seville

Perhaps the second iconic sound for our Seville city guide is that of horses’ hooves clicking on the hot roads – horse carriage rides were famous in Seville, and have now become such a part of the city’s cultural heritage for tourists that you frequently see horse rides all across the old city, and clusters of horses under the shade of trees, resting from the Andalusian sun.

This is the third largest church in the world (behind St. Peter’s in Rome and Brazil’s Basilica of the National Shrine of Our Lady of Aparecida), and an incredibly impressive sight. The cathedral covers such a vast space, with multiple entrances on different sides, that it almost seems to contain its own weather system, with temperatures and wind levels changing depending on where you are inside this vast building. Walking around the cathedral you can even encounter multiple soundscapes within one visit, as in this recording in which we can hear tour guides, crowds admiring the sights and later an organ introducing a wedding ceremony inside just one of the cathedral’s many interior chapels.

4. The gardens of the Alcazar

An impressive royal palace, which manages to be a huge tourist attraction, but also to provide moments of calm and peace in the centre of the city in its extensive and beautiful gardens, repaired from the sounds of traffic and the chaos of the tourist centre. Here we can hear the calm of the birdsong in the Alcazar’s gardens.

Of course, there’s also a modern side to Seville too, and even in the old city this can be seen – for instance, the controversial Metropol Parasol (otherwise known as Las Setas – the mushrooms) is reckoned to be the largest wooden structure in the world, and towers above the city centre like some otherworldly shape. The area has been to some extent appropriated by Seville’s younger population as a hangout space, and modern Seville is represented in our city guide by the sounds of local skateboarders practising their moves at the very feet of these giant wooden mushrooms.

You can explore more of our sounds from Seville – along with their recomposed and reimagined versions, in our interactive Seville sound map: