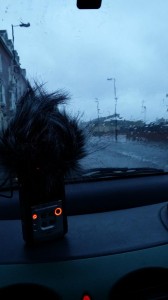 Some field recording trips are just destined to go better than others. There I was, all set for a day of recording in and around the south coast before visiting a friend in Southampton – recorder packed, tank full of petrol and some new tunes to listen to. Then – torrential rain, howling winds, flooded roads, detours and unusable audio from everywhere I stopped. It was looking like a wasted day to get any sounds at all, until you realise and accept that wherever you are, there’s a sound worth hearing.

Parked outside St. Mary’s football stadium in Southampton, the rain hammering down and the windscreen wipers forlornly battling the elements, I started to hear all sorts of little rhythms within the rain and wipers, and thus the idea for this remix was formed, taking tiny snippets of rain and blade activity and creating a rhythmic bed, over which I added a grotesquely-deformed version of the original recording, which turned some of the rain into seemingly-random bass notes. Kind of like Squarepusher, if he was made entirely out of rain.

listen to ‘Heavy rain at St. Mary's’ on Audioboo