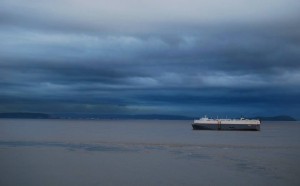 Today we’re off to the tiny island of Flat Holm in the Bristol channel – the field recording was taken by me on a visit last year from the headland, with the sound of a ship passing and an aircraft flying overhead droning over the otherwise-peaceful island sounds.

The remix was taken on by Oxford-based musician Andrew Thompson, who had this to say about his interpretation of the headland sound:

“The idea for the remix was to take elements of the original and process them to build something new. The random and gentle natural sounds such as birdsong and water were sequenced to give some form of order not present in real life and processed to emphasis new aspects. Man-made sounds, such as an aeroplane, were processed to emphasis their unnatural qualities. The original field recording is used as a backdrop, again heavily processed. The track as a whole is a commentary of sorts on the attempt by humanity to impose its will on nature, signified by the processed ship and aeroplane sounds, and with nature being pictured by man as an overpowering and oppressive force. The aeroplane disappears and the sound of the sea gently ebbs away, emphasisng the transient nature of our time as custodians.”

listen to ‘Flat Holm headland – an imagined sound’ on Audioboo