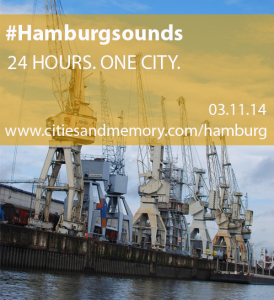 We’re excited to say that this Monday (3 November), we launch the biggest Cities and Memory project so far. #Hamburgsounds takes the sounds of one day in the life of the city, and reimagines them in dozens of different ways.

The city is your own experience of it. It’s about memory, not about documentary – as coloured and distorted as an old photograph – and that’s what this project celebrates.

I spent four days in the city simply listening to its sounds, gathering and collecting them, then sent these sounds around the world to 32 artists and musicians spanning ten countries.

Each of them has chosen a sound (or sounds) from the collection, taken inspiration from it and produced a reimagined version of that part of the city. On 3 November, we’ll be presenting a day in the life of Hamburg through its sounds, with 24 hours of sounds being uploaded at www.citiesandmemory.com/hamburg. The sounds will be released every hour or half-hour, and will represent a real 24-hour timeframe in the life of Hamburg.

What’s striking about the reimagined versions is the incredible variety of sounds produced by the artists. There’s everything from intense, pulsing drones and rhythmic vocal cutups to driving, train-speed techno beats and completely new pieces of music built around a field recording. Each artist has taken their own interpretation of what they heard when they listened to that sound from Hamburg, and applied their own musical and artistic background and experience, and taken the sounds of Hamburg in thirty different directions.

The sounds of a city have never been presented like this before – both as a true-to-life documentary of a day in its life, but also as a complete artistic reinterpretation of one city, as heard by people from as far afield as Cape Town, San Francisco and Barcelona.

Yes, on the surface this is Hamburg, Germany – but beneath that, this is about the intersection between places as we experience them at the time and places as we remember them later.

It could be any city, but at the same time it could only be Hamburg on 3 November 2014.