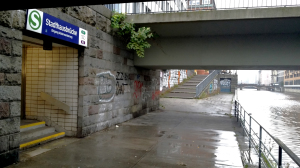 At last we emerge from the public transport system into a typically rainy afternoon in Hamburg. When I was polling people about what sounds you’d expect to hear in the city, ‘rain’ was somewhere at the top of the list along with ‘ships’, so it’s important to have both reflected in the project. Here I sheltered under Heiligengeistbruecke while the rain poured down on the pavement and into the river beside me, deciding when the best moment was to break cover and make a dash for my next destination, the town hall.

In the meantime, I passed the sounds over to Andy Lyon (who works under the name Andrulian), who produced this deliberately introspective reimagining, which he titled ‘Stadthausbrucke (Andrulian’s introspective remix)’:

“We often don’t observe what is happening around us. The idea for this song is to be present and really focus on your surroundings. That’s why I was drawn to the sound, I’m sure we’re often in such a location and don’t really pay attention.

“I’ve used some heavy manipulation to create a wide range of sounds. I used 2 granulators, delay, reverb and another delay to create a sample that is nearly 6 minutes long by adjusting delay feedback which is used as a background sample for a large part of the song. Other samples were processed in a similar way and there was use of a dub type delay effect.

“I really wanted to create all of the sounds from the sample, I didn’t quite manage – I ended up using a pre-recorded drum loop because I couldn’t make convincing percussion sounds but everything else was created from the original sample.”

listen to ‘Under the Stadthausbrucke, Hamburg’ on audioBoom