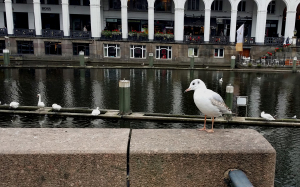 Our first stop once the rain has cleared up (temporarily – this is Hamburg, after all!) is the Rathausmarkt, home of the town hall, one of Hamburg’s most distinctive and famous buildings. The Rathaus itself doesn’t sound very interesting, other than the change in sonic atmosphere between the square outside and the huge stone reverb of the interior.

But outside in the main square, it’s a life-or-death battle for food and territory among the wheeling gulls, which aggressively attack each other for scraps and prime positions on the lampposts above cafes. Taking on this battle scene is Mark Taylor, who returns for his second sound in quick succession.

He calls his piece ‘Memories…Walking With the Gulls’ and explains how he made it:

“The idea in my head was an old man sitting on a bench reminiscing about family walks along the river.

Editing to the original recording was more extensive here to try and create a dreamlike, nostalgic atmosphere:
· Auto pan synced to tempo of the piano – depth of pan automated to peak in the centre of the piece.
· Low pass filter, (cut off frequency 962kHz), used on the everyday low level background sounds in your recording to try and create a feeling of movement / imaginary wind.
· Touch of flanger added to enhance the effect of the filter.
· Stereo delay:
o Feedback not to high and with a low pass filter applied – cut off frequency 1400kHz.
o R channel delay time = eighth notes synced to the piano part.
o L channel delay time = quarter notes synced to the piano part.
· Reverb
· A few high frequency moments restrained using Izotope RX so that they fitted in with the new dreamy ambience.
Piano part was created using Kontakt 5 sampler hosted in Sonar X1.
Sound design done in Sonar X1, mainly using Camel Audio’s wonderful ‘Camel Space’ VST.”

listen to ‘Gull fight in Rathausmarkt, Hamburg’ on audioBoom

listen to ‘Memories…Walking With the Gulls in Hamburg’ on audioBoom