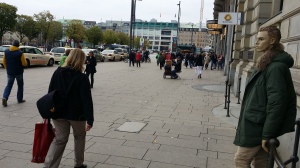 Jungfernstieg is one of the main boulevards in Hamburg, a place full of shops and a place for people to meet – in fact, its name comes from the fact that young people used to meet there (and in fact still do). Sonically, however, it’s not all that interesting – big brand names, imposed shops and department stores and wide streets do not make for a classic field recording, but there was the sound of an old man playing the organ in the street, busking for money, so the field recording was made by slowly approaching and passing him so the sound washes past the speaker and fades in and out.

James Pamphlion took on this recording, and writes of his reimagining:

“I was intrigued by sound of the street organ and the story of organ grinder behind it. The footsteps and undecipherable chatter in the background suggested no one was paying particular attention to the music, evoking a slightly depressing image. I wanted to build a slightly eerie sound around this image, so took a melodic loop to drift it in and out of the original sound.

“I coupled this with a loop of footsteps, effected with delay toward the end of the sound to create a sense of trying to escape the music, which would only get louder. As in a bad dream, perhaps.”

listen to ‘The organ grinder of Hamburg, remixed’ on audioBoom