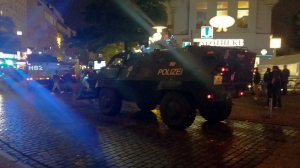 As I mentioned earlier, the anti-ISIS protest that began in Altona and crossed St. Pauli later found its way to the centre of Hamburg, by the main rail station. Having set off to investigate the city centre by night, I got more than I bargained for, as dozens of police cars surrounded the block I was on, followed by crowd control vans with water cannons, and lines of riot police. Protests against the terrorist group ISIS had become violent the day before, and the police presence tonight was huge, even though it didn’t feel like trouble was brewing. I explored a few blocks, checking out the police operation in action and the ongoing protest, which I came across for the third time that day, then headed off into the Hamburg night.

Here’s a video clip of some of the action:

Chicago’s Lee Barry picked out this recording to work on, and titles his version “Protest at Steintorplatz (Gone Underground)”. He explains:

“This one was somewhat of a challenge to work with, as sirens and protests can be cliches. Chord changes were added to re-contextualize the sirens as ‘melody’. This mix is extended to give the impression of being ‘underground’, with the street noises muffled and distant.”

listen to ‘Protest at Steintorplatz, Hamburg’ on audioBoom

listen to ‘Protest at Steintorplatz gone underground’ on audioBoom