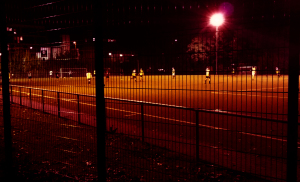 Eleven o’clock and we head out to the lively, studenty area of Sternschanze, always bustling with life. Leaving the station, we come across a busker playing bass guitar through an amp, and wandering up the road there’s a late-night game of football going on, echoing our first sound from 12 noon today.

Here, San Francisco’s Stanislav Nikolov has taken this sound, plus one of partying at Hans-Alberplatz (see 3.00 am’s sound!) and created a house track from them. Here he explains the imaginative and resourceful approach he took to blending these sounds into something entirely new, which he’s titled ‘Region of Attraction’:

“This piece is about the ludic and the liminal; play and transformation. Cities are playgrounds and we are transformed by playing in them. We play musical instruments; we play soccer; we participate in time-honoured rituals like getting roaring drunk and singing loudly in the streets. I was drawn to two sounds that relate to this theme: one of a busker playing electric bass followed by a group playing soccer, and another one of a group singing drunkenly near Reeperbahn.

“I used the sounds to make a house track. I love house that is punchy and propulsive, but also lush, hypnotic, introspective, and at times disorienting — the kind that, in rare combinations of circumstances, could lead to transcendence and transformation on the dance floor. I’ve been wanting to make something that approaches that ideal, and felt the thematic content of the sounds would be fitting. This is my humble attempt.

“From the sounds, I created bass (directly from the bass player!), pad, and string instruments using a combination of samplers and resonators in Ableton. I also played noises such as footsteps, as well as a long continuous section of the Reeperbahn sound. I generated one of the pads with the help of a program I wrote that loops a sound while introducing subtle variations each time. In addition to the sounds, I used Ableton’s 909 drum kit and a sample of a monologue from the 1957 sci-fi film “The Incredible Shrinking Man.”

“Also, to be clear, all the parts except the drum kit and the monologue sample are from those two recordings, even if most are unrecognizable…”

listen to ‘Busking and football at Sternschanze’ on audioBoom

listen to ‘Region of Attraction: Sternschanze & Hans-Alberplatz by Stanislav Nikolov’ on audioBoom