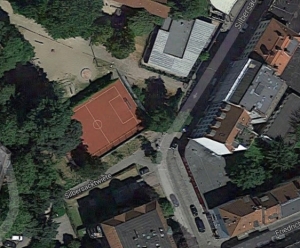 Here we go then – 24 hours in the life of Hamburg, told through its sounds, and reinterpreted by 32 sound artists from all over the world.

So where do we start? Perhaps with the first recording I took after leaving my new temporary home in Hamburg, and within a few yards coming across a gang of schoolchildren playing football on a nearby pitch – as you’ll hear again later, the sounds of people playing the sport are all over this football-obsessed city, boasting two big  teams (Hamburger SV and St. Pauli) and dozens of smaller ones.

Picking up on this sound was Oxford’s Peter Lloyd (who performs as Kid Kin), who calls his remix simply ‘German Football’:

“I chose this recording (children playing football on the streets of Hamburg) because of its understatedness. It’s a common sound that can be heard in most cities around Europe, but there’s a difference in perspective here. For passers-by, it’s children playing, making noise, nothing to see here. For the children, it’s acting, pretending for a few moments that they are their sporting heroes. They aren’t in the street, the field, the park; they’re in the stadium, in front of thousands of adoring fans.

“I wanted to present the field recording in its original state, but with an overly pretentious dressing-up, an almost tongue-in-cheek imagining of the children’s point of view – grandiose and dreaming.”

listen to ‘Children playing football on Silbersacktwiete’ on audioBoom

listen to ‘German football – by Kid Kin’ on audioBoom