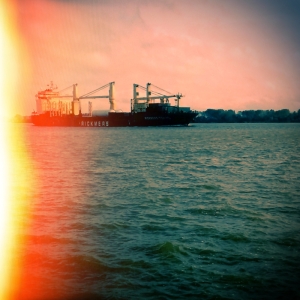 Next up at the Wilkomm Hoeft is the sound of a recording of the waves breaking gently on the rocks close to the quay, interrupted by a musical greeting for a passing ship. This was taken on by long-time C&M contributor Jase Warner, who’s created an entirely new piece of music called ‘Hamburg Daydream’ using this as inspiration and as source material, as he explains:

“Hamburg Daydream is a soundscape based on – as the title would suggest – a daydream, and is inspired by a Cities & Memory field recording that was taken at Willkomm Höft in Hamburg on the banks of the Elbe River.

“I listened to perhaps three or four recordings before picking one. The sounds of the Willkomm Höft, with the ebb and flow of the river, the national anthem being played through loudspeakers, and the whirr-like hum of the wind, led me in to a daydream as I contemplated many things in such a short space of time.

“The piece itself is an exploration of daydreaming and its relationship with sound. Material from the original field recording drifts in and out of the piece, much alike ones awareness of reality does when in a dream-like state. Those moments are separated by movements that represent state of mood and passage of thought, and as the composition progresses those thoughts become more prominent and realised, until eventually one is brought back to reality – to the sounds of the Elbe River, comforted in the knowledge that the world watched over you, and carried you from your dream to the present moment.”

listen to ‘Hamburg daydream by Jase Warner’ on audioBoom